Stop Trying to Raise the Minimum Wage—Make Life Cheaper Instead 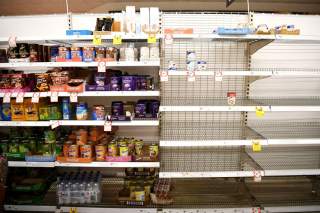 A Presidential election year will bring with it plenty of good, bad, and ugly policy ideas to help struggling families. With the unemployment rate extremely low, much focus will be on real wage growth for workers. This is not currently disastrous – real wages are growing at around 1.4 percent per year (see Chart below). But after 15 years of relatively sluggish performance in GDP per capita growth, politicians will be trying to think of ways to broadly raise living standards further.

Over time, living standards are driven in large‐​part by rising wages, in turn driven by the rising productivity of workers. But in an excellent Bloomberg article this week, Tyler Cowen points out that many of the forces that determine workers’ wages are structural, global, and difficult for policymakers to affect. (And, I’d add, government attempts to affect wages – through, say a $15 minimum wage, or greater union bargaining –come with large trade‐​offs for jobs for certain groups).

Yes, we know that a robustly growing economy driven by broad‐​based productivity growth is the best way to get rising living standards. Unfortunately raising the productivity growth rate of the economy is difficult. Governments don’t really know what drives much of the innovation that really propels growth. And to the extent that we think growth can be enhanced through better policies (certain tax cuts, deregulation etc), Tyler shows that the effects might be offset in the coming years by other global headwinds.

If policymakers really want to improve living standards in the near term then, Tyler concludes that they should focus on living costs. In particular: housing, healthcare, and higher education costs. To which I say: Amen, brother.

A couple of years ago, I wrote “Government and the Cost of Living: Income‐​Based vs. Cost‐​Based Approaches to Alleviating Poverty,” making the case that with the budget deficit already large and productivity growth in a rut, policymakers should focus on undoing bad things that currently raise both raise prices for poorer consumers while also worsening the efficiency of the economy. In other words, they should focus on how far workers’ wages go in being able to afford important goods and services, rather than always thinking about nominal incomes.

Instead of just picking three sectors, as Tyler has done, I looked at what poorer families tend to spend their money on, honing in on specific current policies affecting housing, childcare, food, transport, clothing and footwear, and services governed by occupational licensing.

What I found was that bad laws and regulations at the local, state and federal levels of government in all these areas actually raised prices for the average lower‐​income family by anywhere between $830 and $3,500 directly per year (never mind the damage to economic efficiency). What’s more, my examination of policy areas wasn’t comprehensive. High healthcare costs are an obvious area to tackle, as Tyler says, and there are other transport and house building costs affected by policy (not least trade policy) that could be examined too.

A supply‐​side agenda for lowering basic living costs is an underrated tool to tackle genuine poverty and ease the pressure on all families. Though reform of these areas is difficult to achieve, and we must be cautious to politicians’ using concern about living costs as a precursor to price controls, too much focus on people’s living standards remains on income through wages or transfers, leaving a lot of regulatory low‐​hanging fruit ignored.

This article by Ryan Bourne appeared at CATO on January 16, 2019.