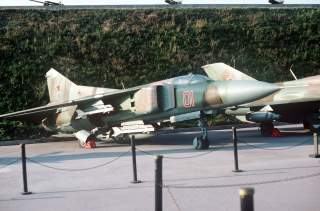 As Col Skurigin descended safely to the ground via parachute, the MiG — its load lightened and CG shifted aft by the sudden absence of the pilot and heavy ejection seat and its Tumansky still running at a reduced power setting — pitched up slightly and began a climb.

On Jul. 4, 1989, Captains J. D. “JD” Martin and Bill “Turf” Murphy checked in at the temporary Zulu facility’s at Soesterberg to assume the duties of ALPHA KILO ZERO ONE and ZERO was TWO. They were looking forward to a quiet day (no Tango scrambles) and as the 32nd Tactical Fighter Squadron (TFS) Zulu log recounts, “a good view of the the fireworks.” “A good view of the fireworks” they got, “a quiet and day” they did not.

As told by Steve Davies and Doug Dildy in their book F-15 Eagle Engaged, while most of the men, women and children associated with the 32nd TFS gathered at the “infield” between Soesterberg’s runway and the “Wolfhounds”‘ squadron area to enjoy carnival rides, hot dogs and Heinekens, and a baseball game between Ops (the pilots) and Maintenance (the maintainers), some 500nm to the east a Soviet MiG-23M “Flogger-B” was lifting off from Runway 23 at Kolobzreg, near Gdansk, Poland, its wings out at the 18.5-degree take-off setting and the Tumansky R-29-300 turbojet roaring in full afterburner. At the controls was Colonel Nikolai Skurigin, taking off for an intercept training mission over the Baltic Sea. His “Flogger” was loaded only with 200 rounds of 23mm ammunition and full fuel tanks. Suddenly, just after raising the landing gear, at only 130-150m (about 400ft) above the ground the afterburner abruptly quit and, in his mirrors, Skurigin noticed smoke trailing is aircraft. The MiG settled into a descent and, convinced that he had an engine failure, the Russian colonel quickly ejected from his disabled aircraft.

As Col Skurigin descended safely to the ground via parachute, the MiG — its load lightened and CG shifted aft by the sudden absence of the pilot and heavy ejection seat and its Tumansky still running at a reduced power setting — pitched up slightly and began a climb. Pointed southwest the “Flogger” climbed resolutely at its trimmed airspeed of 170 knots (take-off speed), flying across the northern part of East Germany, and arrowed into NATO airspace a 35,000ft, on a heading of 230 degrees.

When the “Bee Bop’ sounded, ” JD” and “Turf” initially thought that the only other “Wolfhound” on duty that day — the supervisor of flying (SOF) — was playing a trick on them, but they responded anyway and upon cranking engines, they learned from NIGHTCLUB (the Dutch Wing Operations Center or WOC) they had on their hands the launch all Eagle Drivers yearned for — an Alpha scramble. When “JD” blasted down Runway 13, with “Turf” only 15 seconds behind, the crowd of “Wolfhound” families eating, drinking and playing in the infield thought they were being given an impromptu air show in honor of the holiday!

Davies and Dildy pick up the event from “Turf” Murphy’s perspective:

‘What made the 4th of July scramble different apart from the fact that it was an “enemy” MiG-23 in our airspace(!), was the extensive amount of unintentional communications jamming by our own friendly GCIs. There were at least three other GCI agencies each thinking they had control of our flight, and all four of them not hearing each other on the ground.

‘So, due to the jamming, we were airborne for quite some time before we even knew the actual vector toward our bogey. The initial vector from the scramble order told us to go on a standard northeasterly vector (060) toward what we used to call the “Beak,” on the border of East and West Germany (some 100+ miles away). In fact, we had already leveled off at 35,000 and accelerated to supersonic speed on that northeasterly vector when we received our first piece of intelligible instructions from GCI. That’s when were told to “snap” to the right about 60-70 degrees (off gimbals right side). After snapping right, we immediately grabbed radar locks at about 17nm. Mind you, we are now going supersonic, as seconds earlier we believed we needed to be ‘beating feet’ to the Intra-German Border. Based on our short-range contact and incredibly fast speed, we were tally-ho our bogey in less than a minute. A short-range intercept while going supersonic, fully loaded with fuel and missiles, and being mesmerized at the sight of a Russian “Flogger” in German airspace, all combined with the “Flogger” traveling at only 170KCAS [knots calibrated airspeed] made for a challenging stern conversion!

‘That’s where the eyes play tricks on you — you know, you’re looking at a MiG-23 just like the pictures you’ve studied your entire fighter pilot life, but it just doesn’t add up. What’s he doing here? Why is he alone? And why is he travelling at 170 KCAS? Meanwhile, the comm jamming just would not end! Finally, “JD” had had enough, and as boldly as he could holler into the radio, he said he would talk to only one agency (BANDBOX — the trusty Dutch GCI), and for the rest to “shut up!” Finally, the comm jamming stopped.

“However, the fun only intensified after IDing the jet as a “Flogger.” Initially, we converted to about 2nm in trail. At that range, we could not see that the canopy, as well as the pilot, were missing. When we told GCI that we had just intercepted a “Flogger,” in disbelief they responded back to us with “Say again!” And this went on at least a dozen times. “JD” would say it was a “Flogger” and they would say “Say again!” On about the twelfth attempt, I think they finally believed us. Briefly, after their finally believing the existence of a “Flogger” in their airspace, they told us to intervene him into Laarbruch, an RAF Germany base which was essentially right below us at that time.

‘Shortly after this, the “say again” routine began again with even more fervor. I stayed back at 1nm trail, heater uncaged on him, and “JD” went in for the intervention. When he got into route formation or so, only then did he know something was really wrong. The expression “Houston, we have a problem!” would fit perfectly here. “JD” explained that there is a problem — no pilot! This is when the numerous iterations of “Say again!” began again. He told them, they would not believe him, so he told them again, and they still didn’t believe him, and so on. It must have taken 15 to 20 iterations of “JD” explaining that we had a canopy-less, ejection-seat-less, pilotless “Flogger” on our hands until they finally believed us. Then, and only then, did it all get eerily quiet. It was as if down below us, they were frantically looking through their QRA(I) manuals for what to do now. I suspect they found nothing!

‘All they said was to continue to stay with him. At our initial intercept, the “Flogger” was at 35,000ft. At this point though, it had continued to climb shallowly, obviously approaching its service ceiling for the thrust setting, and only climbing at a rate commensurate with his fuel burn. It topped out at 39,500ft, then I saw a puff of smoke and a vapour trail: it had obviously run out of gas. Then the shallow descent began.

‘It was at that point that GCI knew they had a problem developing real soon — a jet was going to crash somewhere in front of us — and pretty quickly. At that point we were given clearance to arm hot and to engage. However, the engage clearance was qualified with something to the effect of “only engage if you believe doing so will result in less damage on the ground than simply letting the aircraft crash on its own.” “JD” and I had plenty of time to inter-flight chat on the Aux UHF. We went through several iterations of “should we or shouldn’t we?” Our main concern was, “where will all the pieces go?” Would it actually make more sense to let the jet fall down to earth predictably in one piece than to break it into many unpredictable pieces by shooting it? At approximately 15,000ft, we began to finalize our assessment. The “Flogger” was heading for a city, which we later determined to be Lille, France, on the border of France and Belgium. Our conclusion was this: we had decided if we believed the jet would reach Lille, we would fire on it prior to the city limits in order to at least keep the wreckage on the outside of the city. We began to take particular note of the VVI vertical velocity indicator — measuring the rate of descent and mileage covered, and we concluded the “Flogger” would not reach Lille. It looked like it would crash in a relatively sparsely populated region short of the city. So, we armed safe and watched it crash into what looked to me like an empty field. As we got lower, we began to lose radio reception. So I stayed higher to act as a radio relay. From my vantage point at 6,000-10,000 or so, I did not even see it hit the house. “JD” went much lower and he did see the impact with the roof of the house — with the “Flogger” in a perfect gear-up landing attitude. The wreckage crossed the road and settled into the field beyond. Not much of a fire since it was empty of fuel. We stayed on scene another 10-15 minutes or so until reaching Bingo fuel and RTB’d.’