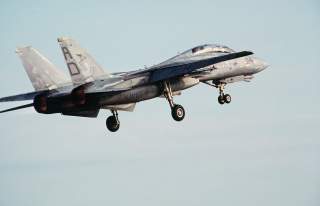 The more than two-centuries-old relationship between the U.S. and Libya has long been punctuated by moments of unfortunate conflict. In the opening years of the 19th century, the young U.S. Navy battled the Barbary state of Tripoli to stop the holding of American ships and seamen for ransom. In the 1980s, several incidents in the air and at sea involved renewed efforts by the U.S. to assert the freedom of navigation and punish Libya for its support of terrorism.

One of those incidents is well known among the aviation geeks because it marked the first use in combat of the legendary Grumman F-14 Tomcat.

In Aug. 1981, two American aircraft carriers, USS Forrestal (CV 59) and USS Nimitz (CV 68), patrolled the Gulf of Sidra—claimed in its entirety by Gadhafi. As Proclaiming that moving into the gulf would constitute crossing a “line of death,” the Libyan dictator began a dangerous game with America’s new president, Ronald Reagan.

Reagan ordered Forrestal and Nimitz to enforce the American doctrine of freedom of navigation. As told by Graham C. Scarbro (who has been an instructor weapon systems officer with VFA-122 and a weapons tactics officer with VFA-41) in his article Vintage Shootdown: Fast Eagle 102 and 107 Splash Two over the Gulf of Sidra, the “line of death” was far in excess of the traditional territorial waters recognized by international law.

On Aug. 19, 1981, that belief would be put to the test when two Nimitz F-14A Tomcats from the VF-41 Black Aces intercepted two Libyan Su-22 Fitters. The U.S. aircraft, “Fast Eagle 102” and “Fast Eagle 107,” were fired on by the Libyans, turning what had been a game of cat and mouse into a deadly encounter.

Kleeman and Venlet fired first, successfully splashing their target. The junior aviators in 107 radioed their skipper, asking for permission to fire. “That’s affirm[ative],” came the reply. Muczynski’s next words were “Fox 2,” as a Sidewinder missile streaked toward the second bandit. “Did you get him?” the skipper calmly queried his wingman. “Yes, sir, I did,” Muczynski responded.

Kleeman informed Nimitz’s radar controllers that they had scored “two enemy kills.” It was the Navy’s first air-to-air engagement since the Vietnam War and the first air-to-air victory for the F-14 Tomcat.

A few months after the incident, Kleeman reflected on what he and his fellow aviators had accomplished. “People are very ready to call somebody a hero,” he said to Chicago Tribune. “What we did was the mission of the airplane. Its only mission is to shoot down other airplanes.”

Noteworthy Kleeman’s aircraft during the engagement (the Grumman F-14A Tomcat Bu.160403) was preserved but it sat in disrepair until it was restored in the summer of 2016 by Commemorative Air Force’s High Sky Wing, based in Midland, Texas.

As we have extensively explained, the U.S. Navy shot down another Su-22 on Jun. 18, 2017, when an F/A-18E Super Hornet from VFA-87 Golden Warriors downed a Syrian Fitter near Tabqah, 20 miles west of Raqqa, after that the attack aircraft had dropped bombs near U.S. backed forces, in the form of the Syrian Democratic Forces (SDF).

This shot down represents the first air-to-air kill scored by a U.S. Navy aircraft since Operation Desert Storm (ODS). During ODS in fact two F/A-18C Hornets belonging to VFA-81 Sunliners downed two Iraqis Chengdu F-7As (the chinese version of the MiG-21 Fishbed) on Jan. 17, 1991, and an F-14A Tomcat from VF-1 Wolfpack shot down an Iraqi Mi-8 helicopter on Feb. 6, 1991.