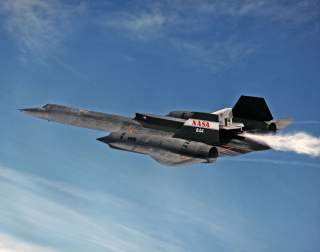 "The spikes are full aft now, tucked twenty-six inches deep into the nacelles. With all inlet doors tightly shut, at 3.24 Mach, the J-58s are more like ramjets now, gulping 100,000 cubic feet of air per second. We are a roaring express now, and as we roll through the enemy’s backyard, I hope our speed continues to defeat the missile radars below."

On Apr. 14, 1986, Operation El Dorado Canyon launched air-strikes against Libya in response to Libya’s bombing of a Berlin discotheque frequented by US military personnel. The attack was performed by a strike-group of 18 U.S. Air Force (USAF) F-111s supported by numerous U.S. Navy and U.S. Marine Corps (USMC) A-6, A-7 and F/A-18 aircraft.

On Apr. 16, 1986 after the raid, SR-71 #64-17960 piloted by Maj. Brian Shul with RSO Maj.Walter Watson, entered Libyan airspace at a blistering 2,125 mph to photograph the targets for bomb damage assessment (BDA). As they neared the end of their sweeps, they started receiving launch indications from Libyan surface-to-air missile (SAM) sites below.

The story of how the SR-71 incredible performance allowed them to hold their course and outrun the missiles before returning home safely to RAF Mildenhall is told by Shul himself in his book Sled Driver.

“In April 1986, following an attack on American soldiers in a Berlin disco, President Reagan ordered the bombing of Muammar Qaddafi’s terrorist camps in Libya. My duty was to fly over Libya and take photos recording the damage our F-111’s had inflicted. Qaddafi had established a ‘line of death,’ a territorial marking across the Gulf of Sidra, swearing to shoot down any intruder that crossed the boundary. On the morning of April 15, I rocketed past the line at 2,125 mph.

I was piloting the SR-71 spy plane, the world’s fastest jet, accompanied by Maj Walter Watson, the aircraft’s reconnaissance systems officer (RSO). We had crossed into Libya and were approaching our final turn over the bleak desert landscape when Walter informed me that he was receiving missile launch signals. I quickly increased our speed, calculating the time it would take for the weapons-most likely SA-2 and SA-4 surface-to-air missiles capable of Mach 5 – to reach our altitude. I estimated that we could beat the rocket-powered missiles to the turn and stayed our course, betting our lives on the plane’s performance.

After several agonizingly long seconds, we made the turn and blasted toward the Mediterranean. ‘You might want to pull it back,’ Walter suggested. It was then that I noticed I still had the throttles full forward. The plane was flying a mile every 1.6 seconds, well above our Mach 3.2 limit. It was the fastest we would ever fly. I pulled the throttles to idle just south of Sicily, but we still overran the refueling tanker awaiting us over Gibraltar.

[…] With the Libyan coast fast approaching now, Walt asks me for the third time, if I think the jet will get to the speed and altitude we want in time. I tell him yes. I know he is concerned. He is dealing with the data; that’s what engineers do, and I am glad he is. But I have my hands on the stick and throttles and can feel the heart of a thoroughbred, running now with the power and perfection she was designed to possess. I also talk to her. Like the combat veteran she is, the jet senses the target area and seems to prepare herself.

For the first time in two days, the inlet door closes flush and all vibration is gone. We’ve become so used to the constant buzzing that the jet sounds quiet now in comparison. The Mach correspondingly increases slightly and the jet is flying in that confidently smooth and steady style we have so often seen at these speeds. We reach our target altitude and speed, with five miles to spare. Entering the target area, in response to the jet’s new-found vitality, Walt says, ‘That’s amazing’ and with my left hand pushing two throttles farther forward, I think to myself that there is much they don’t teach in engineering school.

Out my left window, Libya looks like one huge sandbox. A featureless brown terrain stretches all the way to the horizon. There is no sign of any activity. Then Walt tells me that he is getting lots of electronic signals, and they are not the friendly kind. The jet is performing perfectly now, flying better than she has in weeks. She seems to know where she is. She likes the high Mach, as we penetrate deeper into Libyan airspace. Leaving the footprint of our sonic boom across Benghazi, I sit motionless, with stilled hands on throttles and the pitch control, my eyes glued to the gauges.

Only the Mach indicator is moving, steadily increasing in hundredths, in a rhythmic consistency similar to the long distance runner who has caught his second wind and picked up the pace. The jet was made for this kind of performance and she wasn’t about to let an errant inlet door make her miss the show. With the power of forty locomotives, we puncture the quiet African sky and continue farther south across a bleak landscape.

Walt continues to update me with numerous reactions he sees on the DEF panel. He is receiving missile tracking signals. With each mile we traverse, every two seconds, I become more uncomfortable driving deeper into this barren and hostile land. I am glad the DEF panel is not in the front seat. It would be a big distraction now, seeing the lights flashing. In contrast, my cockpit is ‘quiet’ as the jet purrs and relishes her new-found strength, continuing to slowly accelerate.

The spikes are full aft now, tucked twenty-six inches deep into the nacelles. With all inlet doors tightly shut, at 3.24 Mach, the J-58s are more like ramjets now, gulping 100,000 cubic feet of air per second. We are a roaring express now, and as we roll through the enemy’s backyard, I hope our speed continues to defeat the missile radars below. We are approaching a turn, and this is good. It will only make it more difficult for any launched missile to solve the solution for hitting our aircraft.

I push the speed up at Walt’s request. The jet does not skip a beat, nothing fluctuates, and the cameras have a rock steady platform. Walt received missile launch signals. Before he can say anything else, my left hand instinctively moves the throttles yet farther forward. My eyes are glued to temperature gauges now, as I know the jet will willingly go to speeds that can harm her. The temps are relatively cool and from all the warm temps we’ve encountered thus far, this surprises me but then, it really doesn’t surprise me. Mach 3.31 and Walt is quiet for the moment.

I move my gloved finder across the small silver wheel on the autopilot panel which controls the aircraft’s pitch. With the deft feel known to Swiss watchmakers, surgeons, and ‘dinosaurs’ (old-time pilots who not only fly an airplane but ‘feel it’), I rotate the pitch wheel somewhere between one-sixteenth and one-eighth inch location, a position which yields the 500-foot-per-minute climb I desire. The jet raises her nose one-sixth of a degree and knows I’ll push her higher as she goes faster. The Mach continues to rise, but during this segment of our route, I am in no mood to pull throttles back.

Walt’s voice pierces the quiet of my cockpit with the news of more missile launch signals. The gravity of Walter’s voice tells me that he believes the signals to be a more valid threat than the others. Within seconds he tells me to ‘push it up’ and I firmly press both throttles against their stops. For the next few seconds, I will let the jet go as fast as she wants. A final turn is coming up and we both know that if we can hit that turn at this speed, we most likely will defeat any missiles. We are not there yet, though, and I’m wondering if Walt will call for a defensive turn off our course.

With no words spoken, I sense Walter is thinking in concert with me about maintaining our programmed course. To keep from worrying, I glance outside, wondering if I’ll be able to visually pick up a missile aimed at us. Odd are the thoughts that wander through one’s mind in times like these. I found myself recalling the words of former SR-71 pilots who were fired upon while flying missions over North Vietnam. They said the few errant missile detonations they were able to observe from the cockpit looked like implosions rather than explosions. This was due to the great speed at which the jet was hurling away from the exploding missile.

I see nothing outside except the endless expanse of a steel blue sky and the broad patch of tan earth far below. I have only had my eyes out of the cockpit for seconds, but it seems like many minutes since I have last checked the gauges inside. Returning my attention inward, I glance first at the miles counter telling me how many more to go, until we can start our turn. Then I note the Mach, and passing beyond 3.45, I realize that Walter and I have attained new personal records. The Mach continues to increase. The ride is incredibly smooth.