Straight From Parkland: A Green New Deal For Guns? 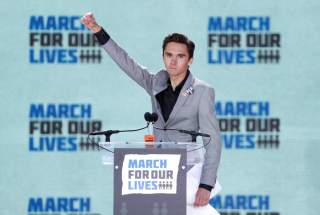 Students who survived a massacre at their Parkland, Florida, high school last year unveiled an ambitious gun policy in the wake of the twin shootings in El Paso, Texas, and Dayton, Ohio, that claimed 31 lives one recent weekend.

The Peace Plan for a Safer America, which students and graduates of Marjory Stoneman Douglas High School announced Wednesday, is meant to be a blueprint for the winner of the 2020 election, whether it is President Donald Trump or a Democrat.

More to the point, the document aims to inspire the nation’s youngest citizens, including those who are just 18, to vote.

“It’s bold. It’s nothing like anyone else is proposing. We are really setting audacious goals. And more than anything, what we are seeking to do is be intersectional,” said Tyah-Amoy Roberts, a Parkland survivor and board member of March for Our Lives, the movement started by the students after a shooter killed 17 people in their high school.

“We know and acknowledge every day that gun violence prevention is not just about preventing mass shootings,” she said.

The “Peace Plan” is an anti-gun violence advocate’s dream. The platform contains six initiatives that are fairly straightforward:

“A Green New Deal, but for guns,” Jaclyn Corin, a graduate of the high school, tweeted Wednesday morning.

Like the Green New Deal, a climate-change proposal, the Parkland students’ Peace Plan aims to be holistic. The plan calls for some gun-policy mainstays like instituting universal background checks, raising the age to purchase guns to 21, banning assault rifles, and implementing “red flag” laws that would allow law enforcement to take away firearms from people deemed to be a risk to themselves or others.

But it also backs a national licensing and registry system, not unlike the one used for automobiles. It also focuses on interventions at the community level, suicide prevention, mental health, domestic violence, and police brutality.

In the immediate aftermath of the Dayton and El Paso shootings this month, it seemed as though momentum around finding solutions to reduce gun violence had picked up considerably. Trump even flirted with the idea of universal background checks, something over half of Americans say they want.

But it took just one phone call from National Rifle Association leader Wayne LaPierre on Tuesday for Trump to back away from the idea. The president told journalists after talking to LaPierre that background checks are now off the table.

While adults in Washington fight about what to do, the student activists of March for Our Lives have been focused for more than a year on voter outreach among their peers. Their movement is flourishing, with more than 100 chapters across the country — and growing.

And to show they’re serious about flexing some of the political muscle at the ballot box, the group is set to host an Oct. 2 candidates’ forum on gun violence, working in collaboration with the anti-gun violence group Giffords, the nonprofit run by former House member and shooting survivor Gabrielle Giffords.

This article originally appeared at ThinkProgress on August 21, 2019.

Kay Wicker is an editorial assistant at ThinkProgress.