Stranded: Why Cargo Ship Workers Are Being Left to Work With No End in Sight 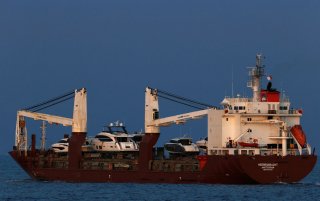 At the beginning of the COVID-19 crisis, there was much attention on the plight of cruise tourists. Governments around the world closed their ports to cruise ships and refused to allow passengers to disembark. While all cruise passengers are now ashore, those who work on cruise ships are not, with an estimated 100,000 cruise ship workers currently stranded.

The same is true of workers on cargo ships. There are an estimated 1.6 million seafarers working onboard various types of ships. These men and women are responsible for transporting 90% of the world’s trade. From the food that we eat to the clothes that we wear, pretty much everything we own was transported by a seafarer.

These workers live and work onboard for months at a time, driving the ship, maintaining its machinery and loading and discharging cargo at ports around the world. With an average crew size of just 23 people, seafarers are used to social isolation.

On the surface, all seems well: goods are still flowing. But the men and women who are transporting these goods are struggling. In a normal month, approximately 100,000 seafarers leave their ships and are replaced by others, but these crew changes have been cancelled. Over a month ago, Maersk, the world’s largest container line, suspended all crew changes and then recently announced an further extension to the crew change suspension. Other shipping lines have also suspended crew changes. It is estimated that 150,000 seafarers are currently waiting to go home.

And for every day that passes, even more seafarers are finishing their expected tour of duty but remain stranded. Seafarers onboard cargo ships are now, in effect, prisoners unable to leave the ship, even to go ashore and use basic facilities, such as the internet, that most of us take for granted.

I’m in contact with some of these men and women. Andy, a captain onboard a ship with 13 crew, has told me that as of April 24 over three-quarters of the crew are still onboard, despite finishing their tour of duty. He said: “The worst part is the not knowing, having nothing to work towards mentally.” It’s hard to understand a situation whereby you go to work only to be told you can’t go home and no one has any idea of when you’ll be able to.

Stranded seafarers are missing key events at home, such as the birth of children. Their partners and families are left to cope in the pandemic without them, with no idea when they will return home. My own research indicates that even in normal times, the delayed return of a seafarer can be particularly tough on their families, especially those with young children, with many workers eagerly counting down the days.

Nearly half of Andy’s crew left home in November, long before any mention of COVID-19. He told me: “It’s becoming more and more difficult to maintain morale and I’m worried that our minds are all increasingly focused on other matters and because of this one of us might do something unsafe.”

Andy is right to worry. This is a dangerous industry, with seafarers 21 times more likely to be killed in a work-related accident than workers ashore. In addition to their “minds no longer being on the job”, those onboard are also likely to be suffering from fatigue, owing to the fact they are likely working ten hours a day seven days a week.

My research indicates that remaining onboard beyond the expected end of a tour poses a risk for safety. One senior officer told me about a time when he had been waiting, with his suitcase, for a helicopter to leave the vessel when he learned that the worker coming to relieve him was no longer coming. He had to remain onboard for five more days. During this time, he reported being unable to focus on the job and thinking only about being at home. He readily acknowledged that during this time he was a risk to both himself and the ship.

As well as posing an issue for safety, remaining onboard beyond the expected end of a tour of duty has an adverse impact on seafarers’ wellbeing, which was again apparent in my study. Seafarers struggled to remain positive when they didn’t go home, with one explaining to me that going home on the expected date was hugely important and that he’d seen colleagues get very upset when they weren’t relieved on time. The adverse impact on wellbeing is particularly concerning given that a study last year found seafarers to have relatively high rates of depression and thoughts of suicide.

Given concerns for both their safety and wellbeing, it is vital that governments around the world work together to get those seafarers who have finished their tour of duty home. And when they do, we should all thank these hidden keyworkers for their sacrifices.