This Strange Looking Thing Could Transform the U.S. Navy 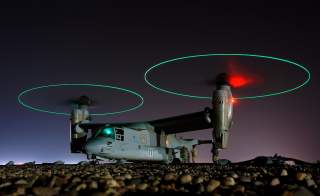 On Feb 10, 2020, the U.S. Navy received its first tiltrotor CMV-22B aircraft. The CMV-22B is the Navy’s version of the V-22 currently in use by the US Marine Corps and U.S. Air Force. While the V-22 was primarily designed for the Marine Corps to accelerate ship-to-shore airborne transport, its unique tiltrotor characteristics have potential boons for the Navy as well.

However, the primary mission of the CMV-22B is a carrier onboard delivery (COD), currently being performed by the Navy’s current fleet of C-2A Greyhounds. However, the Greyhounds were designed in the 1960s, and despite updates they are not up to the demands of supplying modern carriers. While some other cargo aircraft, like the C-130, survive well into the modern era via updates, the mission-specific nature of the COD role means that space is at a premium on COD aircraft. One key ability that the CMV-22B brings to the COD role is the ability to bring a replacement F-35 engine on board.

The CMV-22B also has modifications compared to the Marine MV-22B to improve its functionality as a COD aircraft. It features improved lighting for loading and unloading, a public address system for passengers, and an expanded internal fuel tank for extended range. The wings are also revised to allow for greater carrying weight.

But while the CMV-22B is primarily a COD aircraft, some sites have reported that the CMV-22B will also be used to perform search and rescue (SAR) and support Naval Special Warfare (Navy SEALs) missions. This is a divergence from the single-purpose C-2A Greyhound that preceded the CMV-22B, but one that takes advantage of the tiltrotor functionality of the CMV-22B.

While it’s unlikely that the CMV-22B will be able to perform advanced SAR functionality as delivered due to its lack of onboard sensors, its increased endurance vs. simple rotary wing platforms could prove an asset on longer SAR missions. However, the V-22 aircraft is notorious for strong rotor wash, so that could pose an issue if the Navy plans to use it to pluck sailors out of the water, or off stricken craft.

The Naval Special Warfare support mission is also interesting. While Navy SEAL deployments in recent years have largely been dependent on U.S. Army or U.S. Air Force rotorcraft due to their land-based nature, a pivot back towards naval special operations missions could mean that SEALs could become more reliant on Navy rotorcraft again. But the Navy’s helicopter wings provide Special Operations Forces (SOF) with support “out of hide,” as ancillary duty to their usual SAR and anti-submarine duties. This makes them far less proficient at SOF support operations than the dedicated U.S. Army and U.S. Air Force SOF aviation units.

CMV-22B units will likely face similar limitations when used for SOF support, with their primary role being COD. While the airframe is versatile and multipurpose, it’s unlikely that CMV-22B pilots will actively practice the SOF support skill set as much as the COD and SAR missions. While the CMV-22B represents a much needed update to carrier resupply aircraft, it’s unlikely that SEALs will be riding them into battle regularly any time soon.