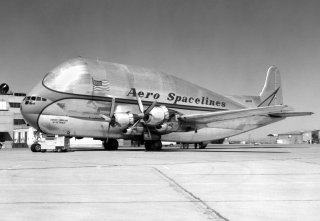 The Aero Spacelines Pregnant Guppy was a heavy cargo plane used for transporting large and bulky items by air. It is best known for transporting equipment for NASA during the 1960s and 1970s, including many parts that were used in the Apollo missions.

Many of NASA’s projects had their roots in West Coast manufacturing, though NASA launched the majority of their space projects from the East Coast. Rocket bodies, engines, command modules, and other components were large and bulky and could not be transported by air or rail.

Oceangoing barges were usually the mover of choice, and transported components down from the West Coast, though the locks of the Panama Canal, into the Gulf of Mexico, and up Florida to Cape Canaveral for final assembly prior to launch.

But barges were at the whim of the ocean and ocean weather, which was at odds with NASA’s tight launch schedules. A delay of even a couple days could gum up launch plans and create havoc with Cape Canaveral’s carefully coordinated countdowns.

Enter John M. Conroy. Conroy was a former actor, Army pilot, and entrepreneur. Conroy and several partners had the idea to convert old commercial airliners into heavy transport airplanes and founded Aero Spacelines. Sometime in 1960, Aero Spacelines acquired surplus Boeing B-377 Stratocruisers that had been used by Pan Am.

Though the B-337s were large airliners in their day, they were nowhere near as big as they would need to be to transport some of NASA’s larger components, like the S-IV second-stage components of the Saturn I rocket that NASA needed for Apollo. These stages were 40 feet tall and couldn’t fit inside a B-377. Conroy modified his B-377s accordingly.

Virtually the entire plane remained unchanged except for the upper half of the fuselage, which ballooned upwards and was 20 feet higher than stock. Originally the new top section had been just a nonstructural element temporarily attached to test the plane’s aerodynamics. The tail section was removable and allowed cargo to slide inwards for loading.

After testing, the project was a success. The fuselage extension was quickly attached, no longer just for testing. Importantly, the Saturn I S-IV stage would just fit inside. The Pregnant Guppy was born.

Still, Conroy had to convince NASA that his Pregnant Guppy was more than just an idea—that it could actually fly. And it was a big risk. Amazing, Conroy was able to arrange a demonstration flight with Werner von Braun and other NASA officials. But, Conroy had stretched his finances to the limit, even getting aviation fuel on credit en route to the demonstration.

To demonstrate the plane’s cargo-carry capacity, Conroy partially filled the cargo hold with sandbags and filled the plane’s fuel tanks to the brim. Though test flights had demonstrated the plane’s airworthiness, the large dome mated to the fuselage was not completely finished—it was still partially attached using wooden two-by-fours and strips of metal.

The Pregnant Guppy performed beautifully. Despite the number one and two engines not working, the Guppy was able to get off the tarmac and into the air.

Though eventually succeeded by the Aero Spacelines Super Guppy, and even other larger aircraft, the Pregnant Guppy was kept busy, transporting a wide variety of NASA freight. This included components for the Gemini program, Apollo modules, parts for the Pegasus satellite and Saturn I—at a cost of just $16.00 per mile. Cheaper, quicker, and much more reliable than transport by barge.

Once the space race wound down, the Pregnant Guppy transported oversize airline parts until it was scrapped in 1979. Not a bad run for a retired Pan Am.