STRATCOM Commander Explains Drawbacks of 'No First Use' 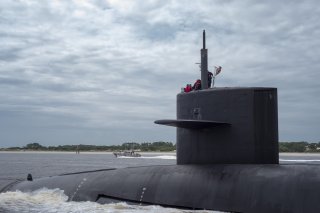 Russia’s renewed aggression in Europe is likely to impact short- and long-term U.S. nuclear policy as the Biden administration prepares to approve its Nuclear Posture Review.

Adm. Charles Richard, commander of U.S. Strategic Command (STRATCOM) testified to the Senate Armed Services Committee earlier this month. Richard said that he was not in favor the United States adopting a “no first use” policy for its nuclear weapons, but that decision would be decided by the Biden administration.

“We'll see what the answer is in the nuclear posture review,” he said. “But fundamentally, I can go and a lot longer answer. But it's one, your adversaries won't believe you. So, it doesn't enhance deterrence in any way. But your allies will believe you and it's highly corrosive to your extended deterrence and assurance commitments.”

The effect of a no first use policy on allies is one of the key considerations for Richard. American allies have previously expressed that a change to nuclear policy could undermine deterrence and endanger them when dealing with other countries with nuclear weapons.

“I have testified to this committee and others as to my recommendations with regard to possible changes to declaratory policy,” Richard said. “Those have not changed. That was a part of my input into the Nuclear Posture Review. As you know, that ultimately will be decided by the President. We receive very clear feedback from the allies in terms of their opinion and the harmful effects on extended deterrence and assurance that changes would have.”

One example of that could be Russia’s invasion of Ukraine.

“I do think right now we're getting a very vivid example real world of the importance of extended deterrence and assurance,” Richard said. “That if we want our allies to assist us in standing up to aggression, we have to provide that assurance to them, such that they're in a position to go after our mutual goals.”

The United States and Russia do not publicly espouse a no first use policy, but Chinese nuclear policy does. However, Richard has previously questioned whether China’s nuclear weapons arsenal aligns with what would be expected from a country with a no first use policy.

A 2021 essay from the Institute for Defense Analysis called “No First-Use of Nuclear Weapons: A Policy Assessment,” cites comments from Richard saying “China … is developing a stack of capabilities that, to my mind, (are) increasingly inconsistent with a stated no-first-use policy.”