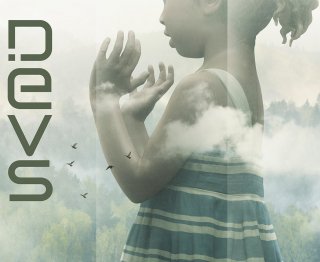 It's not often that a filmmaker with a very specific style and vision is given an extended limited series to do his specific auteurist thing, but that's what Alex Garland has done with Devs, an eight-episode miniseries on Hulu that began its run in March and continues through mid-April.

Garland directed the movies Ex Machina (2015) and Annihilation (2018), both of which were sci-fi techno-thrillers involving big ideas, dystopian landscapes, and absolutely gorgeous visuals. Devs, which Garland created and wrote and directed every episode, is exactly what you would expect from a Garland-overseen limited series: Similar ideas and visuals, expanded to a greater length.

Devs focused on a Silicon Valley tech company called Amaya, founded by Forest (played by a bearded, flannel-clad Nick Offerman.) The company is privately owned and seems to operate with a mysterious purpose that has something to do with quantum mechanics. It's also named after Forest's late daughter, who is memorialized with a giant, creepy statue outside the company's offices.

Sergei (Karl Glusman) and Lily (Sonoya Mizuno) are a couple who both work for Amaya, and in the first episode Sergei is invited to view Devs, the company's secretive special projects division, which is entirely within a faraday cage and full of gorgeous lights that don't seem to serve many purposes.

The end of that meeting kicks off a central mystery, which Lily spends most of the series trying to solve. It also pulls in Russian spies, a secret hidden in a supposed Sudoku app, and much more.

It's an intriguing show, that doles out its answers slowly, especially about what exactly the company is up to. It's very much of a piece with the substantial modern-day unease about the often unchecked power held by the tech industry.

Garland's movie Ex Machina was also about a tech CEO - played in the movie by Oscar Isaac as a bro type who built female robots - but Forest is a different kind of creature of Silicon Valley, one who’s older and quieter, but still very scary.

"A.I. is gonna create 60% unemployment," a visiting politician, played by Janet Mock, tells Ellis in one scene in the third episode. "Instagram makes people feel s**t about their lives. Twitter makes them feel reviled. Facebook destroyed democracy. They use you, need you ... but they don't like you anymore."

Offerman, best known as Ron Swanson on Parks & Recreation, is wonderfully unsettling in the CEO role, exuding a very different energy from how he typically does in comedic roles. Mizuno is what makes the show go, however. The Japanese/British actress, who was in Garland's earlier projects, probably has the most screen time of any character and makes the most of it.

The cast also includes such fine character actors as Zach Grenier (as the Amaya head of security), Brian d'Arcy James (as a spy handler), Alison Pill (as a Devs executive) and the great stage actor Stephen McKinley Henderson (as another Devs team member.) You mean not recognize those people's names, but you will probably know their faces when you see them.

Devs is technically one of the first shows of the new "FX on Hulu" imprint, which takes the sensibility of the hit factory that is the FX network and puts it on the streaming service, along with a large catalog of older FX shows.

What's funny is, it's very easy to imagine a TV show called Devs that's a workplace comedy, about a bunch of silly web developers, in the tradition of The Big Bang Theory or Silicon Valley. I could even see such a show starring Nick Offerman, and not missing a beat.

Even so, I'm glad we got the Devs we did. It's a fine miniseries and use of Alex Garland's visual talents, and a fine kickoff for FX on Hulu.