A Strong Economy, Not Big Government, Raised Wages for the Lowest Earners 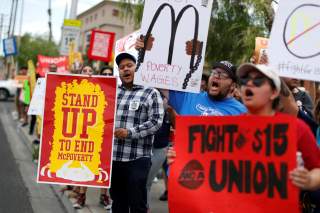 The US employment rate has twice hit 3.5 percent this year, a level last seen in 1969. That fact alone suggests something good has been happening in the job market. But wait there’s more. The prime-age employment rate — we’re talking about workers 25 to 54 — is now back above where it was at the start of the Great Recession. Wages are growing, too. Average hourly earnings for all employees have increased by 3.1 percent over the past year, with earnings for production and nonsupervisory employees up 3.7 percent. Not bad given low inflation and, unfortunately, low productivity growth.

But perhaps the most encouraging data point is how the lowest-paid workers continue to experience faster wage growth than workers overall, which wasn’t the case in the first years of the post-Great Recession recovery. But look what’s happening lately:

The obvious explanation here is that we’re seeing the effect of a long expansion and an ever-tightening labor market. “A stronger labor market tends to reduce wage inequality, narrowing gaps between groups,” explains Indeed Hiring Lab economist Nick Bunker in a report (the same one producing the above chart). Good reason, then, for the Federal Reserve to do what it can to keep the good times rolling.

Another possible explanation is that workers are seeing the impact of minimum wage increases in various states. (My impression is that Democrats on Twitter certainly seem to think this is the real story.) So are the wage gains at the bottom mostly a result of new state government wage rules? This Federal Reserve Bank of Atlanta chart suggests they are not:

And this from Atlanta Fed policy adviser John Robertson:

Interestingly, though, even in the “no increase” states, the relative median wage has improved, suggesting that the increased tightness of labor markets, or some other factor than hikes in state minimum wages, is playing a role in pushing up the pay for those in lower-wage jobs. Consistent with the message of Chair Powell’s speech, the good news is that there is scope to continue to build on the gains from the long and ongoing expansion for workers at the bottom end of the wage distribution.

This article by James Pethokoukis first appeared at AEI on December 17.