A Strong Immigration Policy Must Be Humanitarian and Inclusive 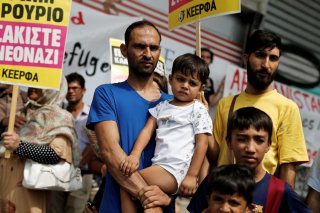 Birth and death mark the parameters of our lives. On a macro scale, these pivotal moments translate into the expansion and contraction of populations. In 1798, Thomas Malthus predicted that the human population would increase more rapidly than its ability to produce food; and thus, starvation would ensue. Today, contemporary concerns about climate change and COP26 underscore the endurance of this Neo-Malthusianism idea—that the population is outstripping the planet’s resources. Mortality still haunts us. The Covid-19 pandemic signaled an unprecedented modern health crisis. Over five million deaths are now attributed to it, but anxieties about overpopulation still predominate.

Analyses of population change are a conduit for imagining different futures. Since antiquity, political and religious leaders have recognized the power of population and its intrinsic connections with security and prosperity. Despite mainstream fixations with population growth, demographic security is critical to national security. Pronatalist solutions including tax incentives, parental leave, and childcare are designed to encourage women to procreate. Less benign solutions include restricting access to reproductive healthcare, and have devastating consequences for women’s rights, freedoms, and demographic security.

As The Handmaid’s Tale illustrates, influencing reproduction is fraught with difficulties: there are no sound examples of pronatalist approaches. Europe is confronted by a sub-replacement fertility dilemma: birth rates are substantially below the 2.1 figure required to sustain a population. Research indicates that the pandemic led more than forty percent of women in the United States to change plans about having a child. In Taiwan, Korea, and Singapore, fertility rates continue to decline apace.

Demographers predict that thirty million working-age Europeans could “disappear” by 2050. There are huge shifts in age structure forecasted, which could force us to reimagine families and societies. The number of Europeans over eighty could increase in tandem with retirement spans. American retirees will outnumber children by the 2030s. More generally, The Lancet forecasts an accelerating decline in fertility worldwide. The subsequent demographic storm combined with the legacies of extensive government borrowing during the pandemic could intensify demands on welfare states and healthcare systems.

Replacement migration refers to the need to offset declines in working-age populations and their overall aging with immigration. But there is a catch: as immigrants from high fertility, “sending” nations assimilate, they produce fewer children. Economic demand for immigrants therefore continues.

Putative national identities and “values” complicate demographic security. The sub-replacement fertility dilemma strengthens populist parties that characterize immigration as an existential threat or the “great replacement” (of white natives by dark-skinned immigrants). Countries like Japan and Hungary prioritize their ostensible cultural homogeneity and rule out immigration. Europe vacillates between building walls and recognizing the integral role of migration. “Solidarity” on acceptance of refugees is elusive. Franchising the problem out is the preferred solution, but externalization has been controversial: it has led to the weaponization of migrants by authoritarian leaders.

The 2016 EU-Turkey deal paved the way for a new direction. Gunboat diplomacy between Greece and Turkey laid bare the risks for migrants caught in the crossfire. EU “partnerships” with Libya helped revive trafficking and slavery. Elsewhere, Pakistan and Iran host over ninety percent of Afghan refugees. Tehran restricts independent monitoring and leverages refugees in negotiations over sanctions. Pakistan has ruthlessly engaged in proxy warfare, ultimately facilitating the Taliban victory and the humanitarian crisis driving migration. Via a flawed “root causes” narrative, the EU entwined development aid with acceptance of returns. An “out of sight, out of mind” strategy has played well with electorates opposed to immigration—but on top of the brutal costs for migrants, what does this mean for demographic security?

The latter must be understood holistically and long term. Substantive research shows that liberal immigration policies are a solution for declining population growth and economic productivity. Some demographers forecast competition between nations to attract a shrinking pool of young migrants, but Brexit and the election of Donald Trump countered demographic and economic logic: immigration was at the heart of both.

All of this has far-reaching consequences. Border walls, fortification of frontiers, and externalization of immigration and deportation generate new threats. In insecure societies with a youth bulge, extremism and involvement in international criminal (including drug) cartels may be the only options without the vital lifeline of remittances. Deportation does not neatly correlate with return; experiences of stigmatization can create exponential layers of violence.

If immigration as a solution to declining populations eventually prevails, how can we make it work? We must think beyond short-term assistance to migrants and develop locally integrated approaches that foster self-reliance and resilience. Holistic community-based solutions can help mitigate against hostility to newcomers. All communities benefit from better education, quality health services, and affordable housing. A focus on ending inequity, valuing dignity, and promoting justice are paramount. Both individual and community voices must be heeded amid an inclusive enabling environment.