Study This Photo: This Powerful Little Plane Is the Future of Counterterrorism 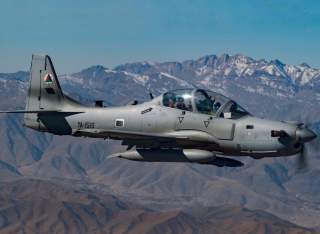 Noteworthy pilots flew the Sierra Nevada/Embraer A-29 Super Tucano and the Textron Aviation AT-6B Wolverine this summer as a part of the Light Attack Experiment (OA-X).

The U.S. Air Force (USAF) has decided that it needs light attack aircraft and has issued a presolicitation on Aug. 3 to kick start the process.

“We must develop the capacity to combat violent extremism at lower cost,” said Secretary of the Air Force Heather Wilson. “Today’s Air Force is smaller than the nation needs, and the Light Attack Aircraft offers an option to increase the Air Force capacity beyond what we now have in our inventory or budget.”

In the notice, the service said only proposals from Sierra Nevada Corp. and Textron Aviation are accepted as they “are the only firms that appear to possess the capability necessary to meet the requirement within the Air Force’s time frame without causing an unacceptable delay in meeting the needs of the warfighter.”

Noteworthy pilots flew the Sierra Nevada/Embraer A-29 Super Tucano and the Textron Aviation AT-6B Wolverine this summer as a part of the Light Attack Experiment (OA-X) to gather additional information about aircraft capabilities, as well as partner nation interoperability, prior to a potential light attack purchase.

A formal solicitation will be released in December of 2018 and a contract will be awarded in 4th quarter of FY19, according to the notice.

“It is important to look at the light attack aircraft through the lens of allies and partners,” said Air Force Chief of Staff Gen. David L. Goldfein. “An interoperable light attack aircraft that delivers common architecture and intelligence-sharing network capabilities will enhance our collective ability to compete, deter and win across all domains.”

As we have previously reported Brig. Gen. Ed Thomas, director of Air Force public affairs, explained that OA-X program was aimed to find a cheaper CAS platform that would be needed to perform the mission over permissive environments which don’t require F-22 or F-35 stealth fighters. However it must be noted the new light attack aircraft will not replace but rather will complement the iconic A-10 Thunderbolt II in CAS missions.