Study This Video: Houthi Rebels Tried to Shoot down a UAE F-16E/F 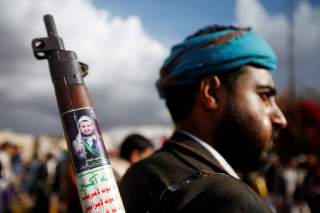 Although the SAMs missed the F-16s, they were able to prevent the Emirati fighters from completing their missions.

Taken on Mar. 26, 2018 the FLIR footage in this post features R-27 air to air missiles deployed by the Houthis as surface-to-air missiles (SAMs) being fired against a flight of two F-16E/F Block 60 fighter jets of the UAE Air Force flying over Yemen’s capital city of Sanaa.

Although the SAMs missed the F-16s, they were able to prevent the Emirati fighters from completing their missions.

Noteworthy on Mar. 21, 2018, Houthis fired an R-27T against a Royal Saudi Air Force (RSAF) F-15S hitting the fighter. The Strike Eagle in fact was badly damaged but managed to return home safely.

Based on the F-16C/D Block 50/52, the F-16E/F features improved radar and avionics and conformal fuel tanks (CFTs); it has only been sold to the United Arab Emirates. A major difference from previous blocks is the Northrop Grumman AN/APG-80 Active electronically scanned array (AESA) radar, which gives the airplane the capability to simultaneously track and destroy ground and air threats. The Block 60’s General Electric F110-GE-132 engine is a development of the −129 model and is rated at 32,500 lbf (144 kN). The Electronic Warfare system is supposed to be quite advanced and includes the Northrop Grumman Falcon Edge Integrated Electronic Warfare Suite RWR together with the AN/ALQ-165 Self-Protection Jammer. Falcon Edge, which was developed by Northrop Grumman specifically for the Block 60, is capable of showing not only the bearing of any threat but also the range. The Block 60 allows the carriage of all Block 50/52-compatible weaponry as well as AIM-132 Advanced Short Range Air-to-Air Missile (ASRAAM) and the AGM-84E Standoff Land Attack Missile (SLAM). The CFTs provide an additional 450 US gallon (2,045 L) of fuel, allowing increased range or time on station. This has the added benefit of freeing up hardpoints for weapons that otherwise would have been occupied by underwing fuel tanks. The MIL-STD-1553 data bus is replaced by MIL-STD-1773 fiber-optic data bus which offers a 1,000 times increase in data-handling capability. UAE funded the entire $3 billion Block 60 development costs, and in exchange will receive royalties if any of the Block 60 aircraft are sold to other nations.

Like the F-35, the Block 60 F-16 has a built in FLIR/laser targeting system rather than using a dedicated pod that would occupy a hardpoint, increase drag and RCS.