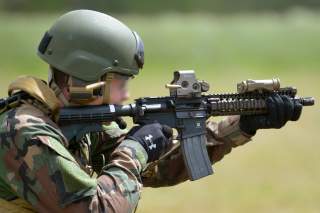 When U.S. soldiers received new helmets in the early 1980s, the reaction was dismay.

The Personnel Armor System for Ground Troops (PASGT) was supposed to offer better protection than the M1 helmet worn from World War II to the mid-1980s. Unfortunately, it also looked like the “Stalhelm” helmets worn by Nazi soldiers. The PASGT was replaced in the mid-2000s by the Advanced Combat Helmet, which looks a bit less stormtrooper-esque, but still different than the M1 or the soup plate-style helmets worn by American and British soldiers in World War I.

But a new study concludes that the old helmets worn in the First World War – the first conflict where helmets became standard issue for soldiers – work just as well in some cases as the fancy new designs.

Surprisingly, the modern – and more expensive -- helmet actually proved no better – or even inferior – to the century-old helmets, and the French 1915 Adrian helmet in particular.  “At certain measurement locations, some historical helmets provided more blast attenuation than the modern helmet even though the modern helmets based on modern fiber composites are far more protective from typical ballistic threats,” the study found.

“While ballistic protection provided by helmets has increased significantly since WWI and saved many lives, the results found here suggest that the ACH did not perform quantitatively or qualitatively better than the historical helmets, and performed worse than the Adrian helmet for overhead primary blast at the crown of the head.”

Military headgear has been worn since ancient times -- think Roman legionnaires or medieval knights – with helmets built from metal, leather or cloth. These were mostly designed to stop sword cuts, or to look impressive in parades. When the First World War began, soldiers went into battle wearing cloth caps or leather, spiked German pickelhaube helmets.

The problem was a lethal new weapon that emerged in the early 20th Century. The advent of howitzers and mortars, firing high-explosive shells that shattered into clouds of metal fragments, made artillery the deadliest killer on the battlefield. Some estimates attribute more than half the casualties in World War I to artillery (that number may be as high as  60 to 75 percent in World War II and the Korean War). “Multiple reports at the time estimated that at the start of the war, over fifty per cent of fatalities occurred due to shrapnel or artillery shell fragments, often striking the head, for which steel helmets could be effective,” the Duke study noted.

But another, less obvious impact of shell and bombs are blast pressures that cause concussions and other internal injuries. Just like head injuries from contact sports like football, concussive injuries have received much more attention in recent years. For example, despite initial claims that no U.S. soldiers were hurt in a January 2020 Iranian ballistic missile strike in Iraq, it later turned out more than 100 suffered traumatic brain injuries.

The Duke study focused on blast effects. Interestingly, the crest on top of the oval-shaped French Adrian helmet helped alleviate blast effects. “This result might stem from the deflector crest along the midline of the helmet,” the researchers said. “Specifically added with overhead shrapnel in mind this feature of the helmet could deflect the shock wave off to the side of the head, rather than allow shockwave impingement onto a more planar surface seen in the other helmets. The crest also provides an added first layer for shock wave reflection before reflecting a second time off the helmet itself.”

Yet for the griping about the weight and discomfort of helmets, they are better than no helmet at all. “All tested helmets provided significant protection against primary blast brain injury compared to a bare head scenario,” the study concluded. “This protection substantially decreased the potential for primary blast neurotrauma from typical World War I artillery threat equivalents.”