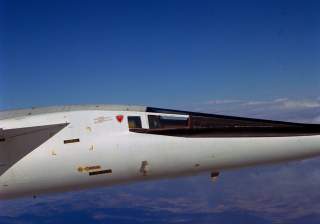 It was capable of flight at speeds of three times the speed of sound (roughly 2,000 miles per hour) at altitudes of 70,000 feet.

The interesting image in this post is a close-up photo of an XB-70A taken from a chase plane.

The XB-70 had a movable windshield and ramp. These were raised during supersonic flight to reduce drag. When the pilot was ready to land, he lowered the assembly to give both him and his copilot a clear view of the runway.

The XB-70 was the world’s largest experimental aircraft. It was capable of flight at speeds of three times the speed of sound (roughly 2,000 miles per hour) at altitudes of 70,000 feet. It was used to collect in-flight information for use in the design of future supersonic aircraft, military and civilian. The major objectives of the XB-70 flight research program were to study the airplane’s stability and handling characteristics, to evaluate its response to atmospheric turbulence, and to determine the aerodynamic and propulsion performance. In addition there were secondary objectives to measure the noise and friction associated with airflow over the airplane and to determine the levels and extent of the engine noise during takeoff, landing, and ground operations.