Submarine Strike: Why Did a Russian Nuclear Submarine Fire a Torpedo at Another Russian Sub? 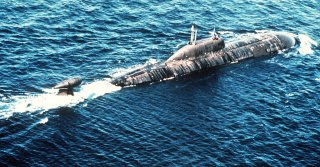 Here is the story.