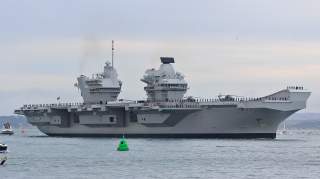 The problem? Russia’s 3M22 Zircon streak toward their target as fast as Mach 6, or 4,600 miles per hour. But the Sea Ceptor defensive missiles on the Queen Elizabeth–class carriers can only intercept targets traveling up to Mach 3, or about 2,300 miles per hour, anonymous British defense officials told the British press.

“Hypersonic missiles are virtually unstoppable,” a senior naval source told the Daily Mirror. “The whole idea of the carrier is the ability to project power. But with no method of protecting themselves against missiles like the Zircon, the carrier would have to stay out of range, hundreds of miles out at sea. Its planes would be useless and the whole basis of a carrier task force would be redundant.”

The Zircon has an estimated range of 250 miles. Traveling six times the speed of sound, it could reach that maximum distance in a little over three minutes.

Concluded British newspaper the Independent: “It means the two ships, the first of which is not expected to be fully operational before 2020, could be rendered obsolete by this new development in hypersonic warfare despite costing up to £7 billion [US$8.9 billion] to build.”

And if that news wasn’t bad enough, it now turns out that estimates of the Zircon’s speed may have been premature. Russia’s TASS news agency now reports that the Zircon achieved a speed of Mach 8 during recent tests. That would mean the missile reached a speed of 6,138 miles per hour.

“During the tests of the missile, it was confirmed that its speed on the March reaches eight Mach,” according to what TASS described as an unnamed “source with Russia’s defense sector.”

TASS noted that there was no information on when the test was conducted and from which platform the missile was launched. However, TASS’s source did note that “Zircon missiles can be launched from universal launching platforms 3C14 which are also used for the Onyx and Caliber missiles.”

The Zircon will replace P700 Granit missiles on the Kirov-class nuclear-powered battlecruisers Pyotr Velikiy and Admiral Nakhimov, as well as submarines. Though the Granit has a slighter longer range of about 390 miles, its estimated maximum speed is only Mach 2.5.

So what does all this mean? Not a great deal, despite Pravda’s boast that the Zircon means Russia “would be able to annihilate an up-to-date British aircraft carrier at one fell swoop” (see the video here).

Britain is not about to cancel a nearly $10 billion program for carriers that will be the jewels in the Royal Navy’s crown. The leaks to the British press from naval officers no doubt reflect legitimate concerns, but they also serve as leverage for bigger budgets to fund weapons to stop Russian hypersonic missiles.

If Russia hopes to achieve conventional deterrence with its hypersonic missiles—don’t mess with us, Britain, or we’ll wipe the White Ensign off the seas—then they’re aiming at the wrong target. If Russia and NATO manage to avoid conflict in eastern Europe, it will be because of political sensibility and not hypersonics.

Finally, it’s important to remember just how much we don’t know here. We don’t know how these hypersonic missiles will perform in combat, either in terms of flight characteristics (note that DARPA’s experimental Mach 20 hypersonic gliders encountered heating and instability problems during tests) or in terms of sensors and electronic warfare. Nor do we know how shipboard defenses will evolve as the advent of tactical antimissile lasers draws nearer.

Michael Peck is a contributing writer for the National Interest. He can be found on Twitter and Facebook. This article originally appeared in April 2017 and is being republished due to reader interest.