SUNK: Thanks To China, Navy Submarines Are Becoming Less Survivable 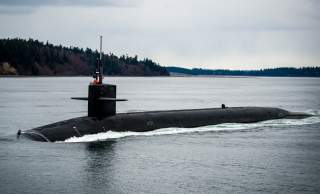 Key point: China has a powerful, and growing, array of sensors support its anti-submarine mission.

The U.S. Navy is rethinking the way it deploys its submarines, all in order to help the powerful vessels avoid detection by increasingly sophisticated Chinese sensors.

“Get deeper,” is how Vice Adm. Chas Richard, commander of the 70-strong American submarine force, summarized his guidance. Richard spoke at a professional symposium in Virginia on Nov. 6, 2019. USNI News was the first to report Richard’s comments.

Richard and his staff reportedly are preparing a new strategy document, Vision 20XX, that will “outline the submarine force’s role in a future fight,” according to USNI News reporter Megan Eckstein.

The rapid improvement of submarine-detecting sensors is driving Richard’s rethinking. Traditionally, navies rely on active and passive sonar aboard surface ships and submarines to detect enemy boats. The U.S. fleet for decades has designed its own subs to counter that manner of detection, shaping the vessels to reduce their sound signatures while also developing tactics for slipping between layers of warm and cold water to mask noise.

But China’s new acoustic sensors on the Pacific Ocean seafloor, and space-based laser sensors that China also is deploying, complicate the U.S. fleet’s undersea operations. Thanks in part to new, more powerful computers that can process sensor data faster than ever before, there are more and more ways to hunt submarines.

“Instead of standard sonar, sub-hunters could use lasers or even light from LEDs, carefully tuned to frequencies that carry best underwater,” Bryan Clark, an analyst with the Center for Strategic and Budgetary Assessments in Washington, D.C., told Breaking Defense.

“You could even eschew active sensing altogether and passively monitor changes in the ocean environment, such as changes in background noise from sea life or tiny ripples on the surface from a sub passing underneath,” Clark added. “These indirect detection methods also have their anti-aircraft counterparts, where ‘passive radar’ looks for stealth aircraft by analyzing disturbances in the background chatter of radio transmissions that are part of modern life.”

New anti-submarine-warfare methods are “analogous to what is being pursued in the electromagnetic spectrum against stealthy and other aircraft,” Clark said. “The advantage provided by stealth will continue to diminish.”

Richard said the submarine force needs to consider all the ways the enemy might detect American boats. “Our ability to avoid detection, our stealth, is our greatest asset,” Richard said. “But when we think about what that means moving into the future, this becomes more than simply controlling our radiated signatures in the acoustic spectrum. Electromagnetic becomes just as important, and I think the thing we have to add in is now our disturbance of the environment.”

“We’re getting to the point where it doesn’t matter if you know based on the platform’s radiated noise; you did something to the environment that is detectable, and that’s how they figure out where you are or how we figure out where they are,” Richard continued.

“That’s a direction we’re pushing now. It starts with something as simple as, we are never going to periscope depth again unless we want to; we are simply going to make that obsolete, that is a goal specifically that gets after what I’m talking about.”

The changes the submarine force must make in order to survive could force fleet planners to reconsider what roles the undersea vessels play in fleet operations. Since the end of the Cold War, attack submarines with their large payloads of cruise missiles have been among the U.S. military’s most important platforms for land-attack strike missions.

A submarine can rise to shallow depth a few hundred miles off of an enemy’s coast and fire potentially dozens of Tomahawk cruise missiles. The launch could betray a sub’s position. But for decades that didn’t really matter to Pentagon planners, as a Tomahawk-launching submarine quickly could submerge and hide.

Now hiding is getting harder. Clark told Defense News it might be time to reassign the land-attack mission to surface ships in order to allow submarines to preserve their stealth. “The idea that our submarines are our go-to asset to gain access, that may not be true in the next few years as it was in the past 10, so there is a question as to whether we should be investing in submarines to maintain the undersea strike capacity.”

“The surface fleet is likely going to be our best strike capacity asset in the next decade,” Clark said.