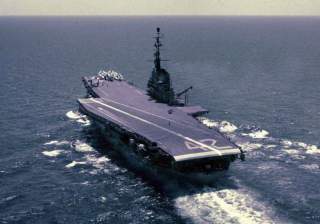 Last month, the Navy shocked observers by proposing to retire the nuclear supercarrier USS Harry S. Truman from service some twenty years before expected. Given the gravity of this proposal, it’s worth reflecting on previous decisions to retire aircraft carriers before the exploitation of their full lifespans. In the mid-1970s, the U.S. Navy decided to retire the USS Franklin Roosevelt, a Midway-class aircraft carrier named in honor of President Truman’s predecessor. The Franklin Roosevelt was the first carrier named after a U.S. President, upon an order given by President Harry S. Truman.

Robert Farley, a frequent contributor to TNI, is a Visiting Professor at the United States Army War College. The views expressed are those of the author and do not necessarily reflect the official policy or position of the Department of the Army, Department of Defense, or the U.S. Government. This piece originally appeared in April 2019 and is being republished due to reader's interest.