The Super Sherman Was an Israeli Tank Beast 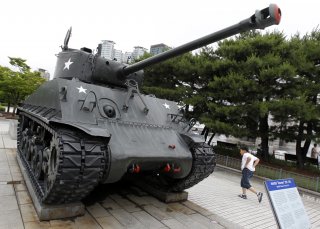 After World War II, the new state of Israel received a significant amount of military aid in the form of surplus Allied equipment, which was leftover from the war and no longer needed in Europe. In addition to a dizzying array of small arms, airplanes, and armored vehicles, Israeli also received significant quantities of Sherman tanks, the armored Allied workhorse.

By the early 1950s however, the edge that the venerable M4 Sherman had over more modern tanks had lessened considerably. The Sherman was outclassed in terms of both armor protection as well as firepower. In an effort to field a more capable tank, the Israelis looked abroad.

One of the tanks that offered advantages over the older Sherman was the French AMX-13. While the French tank was considered rather rugged and reliable and offered a powerful firepower advantage over the Sherman, the AMX-13’s armor package was considered inadequate. And while Israeli did eventually purchase AMX-13s tanks from France, the Israeli Defense Forces decided to up-gun their Shermans in parallel.

The decision to increase Sherman’s firepower had several advantages. The Sherman offered crews better protection than the AMX-13, and tank crews would require minimal retraining, as they would essentially be driving the same platform which they had previously trained on. The gun conversion was quickly incorporated onto many Israeli Shermans, earning the tank the moniker “Super Sherman.”

The Israeli Defense Forces (IDF) eventually incorporated further improvements to the Sherman platform that extended beyond a more powerful main gun. Though certainly more powerful, the new gun had increased the weight of the Sherman tanks, putting strain on the tank’s gasoline engine. This was replaced with a more powerful diesel engine that offered higher power output than its predecessor but also was a boon to combat as diesel fuel is significantly less flammable and less likely to catch fire inside the tank during combat. The IDF also replaced the rather narrow tracks of its Sherman tanks with wider tracks, reducing ground pressure and improving the vehicle’s off-road mobility

In the 1960s, the IDF turned to French guns to breathe new life into their World War II-era Shermans once again. The plan was to add a still more powerful 105-millimeter gun to their frames. This proved to be an addition of immense value during the 1973 Yom Kippur War. During that desperate conflict, the Israeli so-called Super Sherman tank armed with the powerful gun was able to successfully engage virtually all enemy armored vehicles they came up against.

Post-conflict the IDF gradually retired their Super Shermans, as they had reached the maximum end of usefulness and further upgrades to the old platforms would be better directed to purchasing or upgrading other, newer armored vehicles. Still, the Israeli Super Shermans are a good—if extreme—example of how well-thought upgrades to an old tank can yield a platform much more capable than the original design.