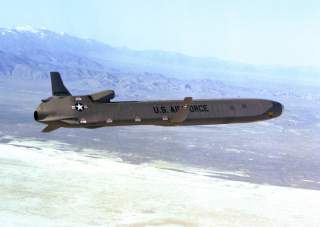 Should major global powers be immersed in a high-stakes, dangerous escalation of tension, raising the possibility of a nuclear confrontation, could the existence of a long-range nuclear-armed cruise missile provide that unique additional variable necessary to keep the peace?

Such is the Air Force thinking when it comes to the current developmental trajectory for its emerging Long-Range Standoff Weapon (LRSO) -- a new, aircraft-launched nuclear cruise missile engineered to prevent nuclear conflict by holding enemy targets at risk potentially inaccessible to other methods of attack.

The LRSO will be operational by 2030, Goldfein said.

The weapon will provide commanders with a wider range of options, as a bomber-launched nuclear cruise missile brings the prospect of deterring nuclear attack without needing to have a stealth bomber actually penetrate the airspace. Naturally, this lowers risk and also increases the deterrence posture by virtue of letting a potential adversary know there are a wide range of methods through which a response might be possible. Interestingly, the existence of nuclear weapons, according to Goldfein and other U.S. Air Force senior leaders, - is entirely based upon the notion of deterrence -- bringing the prospect of massive destructive power to achieve the opposite effect - stopping nuclear war before it happens.

In the event of major nuclear attack on the US, a stand-off air-launched nuclear cruise missile may be among the few weapons able to retaliate and, as a result, function as an essential deterrent against a first-strike nuclear attack. The idea with deterrence is not so much to use nuclear weapons under threatening circumstances, but rather to provide Commanders and decision-makers with a range of options with which to prevent escalation, a concept recently articluated by Goldfein.

Service engineers and weapons architects have been working with industry partners concepts, configurations and prototypes for the weapon.

In 2017, the Air Force awarded two $900 million LRSO deals last year to both Raytheon and Lockheed Martin as a key step toward selecting one vendor for the next phase of the weapon's development. While many details of the weapons progress are not available naturally for security reasons, Air Force officials tell Warrior Maven that plans to move into the Engineering and Manufacturing Development phase are on track for 2022.

Senior Air Force leaders continue to argue that engineering a new, modern Long-Range Standoff weapons with nuclear capability may be one of a very few assets, weapons or platforms able to penetrate emerging high-tech air defenses, depending upon the warfare scenario. Such an ability is, as a result, deemed crucial to nuclear deterrence and its principle aim - preventing major-power warfare.

“There may be defenses that are just too hard. They can be so redundant that penetrating bombers becomes a challenge. But with standoff (enabled by long-range LRSO), I can make holes and gaps to allow a penetrating bomber to get in,” Lt. Gen. Stephen Wilson, former Commander of Air Force Global Strike Command, (and Current Vice Chief of Staff of the Air Force) told the Mitchell Institute for Aerospace Studies in 2014.

In fact, this kind of thinking is analogous to what is written in the administration’s Nuclear Posture Review which, among other things, calls for several new low-yield nuclear weapons options to increase deterrence amid fast-emerging threats.

Unlike the ALCM which fires from the B-52, the LRSO will be configured to fire from B-21 bombers as well, service officials said; both the ALCM and LRSO are designed to fire both conventional and nuclear weapons.

“The ALCM is 25 years past its design life,” Goldfein said.