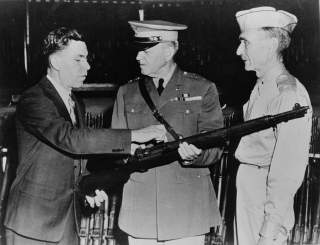 Key point: The most important word for the M-1 Garand is "reliability."

Some might be surprised that the self-promoting Patton did not consider himself the greatest battle implement ever devised. But Patton knew a thing or two about killing – and he knew that in the hands of Allied troops the Garand did its share of killing.

In a world filled with bolt-action rifles on both sides of World War II, the gas-operated semi-automatic M-1 stood out from the crowd.

The Garand fires the hard-hitting caliber .30-06 round at even distant targets as fast as a soldier can pull the trigger. Additionally, it possesses qualities beloved by all troops. It is easy to clean, reliable even in the worst battlefield conditions and solidly built.

Although both the Germans and the Soviets experimented with semi-automatic rifles – the Gewehr 43 and the SVT-40, for example – neither was as widely distributed or used as the M-1.

Adopted before World War II, the Garand also saw action in Korea as well limited service in Vietnam. What’s more, tens of thousands of surplus M-1s ended up in the arsenals of America’s allies around the world.

But there were times during its genesis when there were serious doubts whether the M-1 would ever work. Design problems hampered its manufacture, and skeptics in the U.S. military still had a love affair with the tried-and-true M-1903 Springfield bolt-action rifle.

But the M-1 proved its worth, making it one of the most popular weapons … ever. “For the American forces the M-1 Garand was a war-winner whose strong construction earned the gratitude of many,” Chris Bishop and Ian Drury wrote in Combat Guns.

First, let’s get the pronunciation correct.  John Cantius Garand, the Canadian-born weapons genius who designed the namesake M-1, pronounced his name in a way that rhymes with “errand,” according to Maj. Gen. Julian Hatcher, a close friend of the designer and a U.S. Army weapons expert.

Garand joined Springfield Armory as a consulting engineer in 1921, where he worked for the next 15 years designing and perfecting a semi-automatic rifle for use by the Army. Although at the time considered revolutionary, his design seems ludicrously simple today – possibly because it is the basis of many other semi-automatic rifles.

Built around a loading system called an en bloc clip, you pull back the Garand’s bolt until the follower in the rifle’s internal magazine holds open the action. Then you push the sheet metal en bloc clip loaded with eight .30-06 rounds into the magazine and allow the bolt to slide forward, which strips off the top round and chambers it.

Pull the trigger and fire the first round – gases from the cartridge’s burning propellant flow through a gas port and ram back an operating rod that opens the bolt while re-cocking the rifle’s hammer. The rifle ejects the spent cartridge, a new cartridge enters the chamber, and the bolt slams home, chambering the new round – and the rifle is ready to fire again in a split second.

That’s all a lot faster than a bolt-action rifle, which meant that during World War II soldiers who carried the M-1 quickly learned they could deliver considerable amounts of firepower very, very quickly. What’s more, the rifle’s action wasn’t easily fouled by the mud, dirt, snow or volcanic ash found on the battlefields of Europe and the Pacific.

“Reliability is still number one from the men I’ve spoken with,” Erik W. Flint, director of the Lewis Army Museum at Joint Base Lewis-McChord, told War Is Boring.  “You don’t hear stories of an M-1 Garand failing in combat.”

Flint, a lieutenant colonel in the U.S. Army Reserve who served in the infantry and has a Ph.D. in history, said it took time for the M-1 to gain acceptance.

“Resistance to the Garand was stiff in many quarters, especially in the United States Marine Corps where the M-1903 Springfield had reigned supreme for decades,” Flint said.

“Much of this resistance resulted from the belief in the primacy of marksmanship over volume-of-fire. A bolt-action rifle required precise, well-aimed shots, while it was believed a semi-automatic rifle lent itself to poor marksmanship due to the ability to rapidly fire round after round without the pause required to deliberately chamber each successive round.”

However, even the Marines changed their minds once they used M-1s during the Battle of Guadalcanal in 1942-43. The Springfield might have been the more precise weapon, but unless you were a sniper, the M-1’s rate of fire and the ability of the powerful .30-06 round to penetrate thick jungle foliage mattered more than match marksmanship.

Soon, any leatherneck who could get his hands on an M-1 gladly carried it.

Of course, even a great battle rifle like the M-1 has its weaknesses. It is heavy, weighing in at more than 11 pounds. Perhaps its most famous weakness is the “M-1 ping.” The rifle ejects the empty en bloc clip with a loud “ping!” which pretty much announces to the enemy that your weapon is empty.

No matter: Many GIs and Marines soon carried empty clips in their pockets that they would throw on the ground. The sound was often enough to flush out enemy soldiers who then faced a fully loaded M-1.

In a way, the M-1 is still with soldiers today, Flint said, despite the fact it was slowly withdrawn from service during the late 1950s.

“The M-14, which is essentially an M-1 with a 20-round box magazine, was adopted as the Garand’s replacement,” he said.  “Essentially, it was the same rifle with a greater magazine capacity.  The M-14 maintained the same reliability of the M-1 while shifting to the new 7.62 NATO round.”

“The reliability of the Garand design is best highlighted by the fact that the M-14 is still in use by modern U.S. forces as both a sniper rifle and as a squad designated-marksman rifle.”

This article was first featured earlier in 2019 and is being republished due to reader's interest.