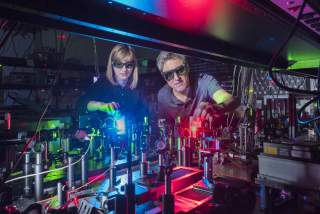 Has America been technologically stagnant for a half century? That’s apparently one of the main arguments found in New York Times columnist and AEI visiting fellow Ross Douthat’s upcoming book, The Decadent Society: How We Became the Victims of Our Own Success.

Now, I haven’t read this book. But it was just reviewed by entrepreneur and venture capitalist Peter Thiel, who quotes the following passage, I assume accurately: “Over the last two generations,” Douthat writes, “the only truly radical change has taken place in the devices we use for communication and entertainment so that a single one of the nineteenth century’s great inventions [running water] still looms larger in our every­day existence than most of what we think of as technological breakthroughs nowadays.”

So the Robert Gordon thesis, as well as Thiel’s Twitter vs. Flying Cars argument. And this stagnation is a result of, well, “decadence,” I suppose. Now since I have not read the book, I will keep my analysis general.

First, any big theories about American technological stagnation, as reflected in our measured productivity numbers, need to acknowledge that it’s not just an American thing. The slowdown has occurred in dozens of countries, and every advanced economy is churning out white papers on the problem. And some of that research points to non–sociological explanations. For instance, more American output now occurs in low–productivity service sectors such as health care. That said, I am worried America has become a less future–oriented society. It will be interesting to see how Douthat’s analysis syncs with that view.

Second, don’t forget the obvious. Science is hard. Tech progress is hard. Progress isn’t natural. And good ideas are getting harder to find. As such, we need to devote more resources to finding them. And we have to make barriers to progress stay low.

Third, don’t confuse tech progress with productivity gains. Maybe our tech future is already here — it’s just not evenly distributed, to (maybe) modify William Gibson. We may have a diffusion problem rather than an innovation problem. It takes time to harness new technologies, whether it’s the electric motor or artificial intelligence. Progress is lumpy. And maybe we are missing how the latest IT advances are already working their way through the economy in the 2000s. It’s too early to assume giving humanity easy access to all human knowledge through a small pane of glass in its pockets is no biggie, or that CRISPR genetic editing is no biggie.

Anyway, I greatly look forward to reading this book.