Support the Candidate Who Is Most Likely to Win 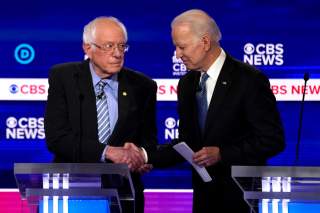 Electability has been the single most important force motivating voters in the 2020 Democratic primaries.

But what is it? What makes one candidate seem like they could get votes from a majority of Americans while another one couldn’t?

Objectively, political scientists like myself have done a lot of research on what types of candidates win and lose. We find that moderate candidates tend to win more often than far-left or far-right candidates do. Despite the widespread assumption that women are less electable than men, research shows that women candidates are at least as likely to succeed as men are. That was true in 2018, and it’s especially likely when an election year is dominated by scandal, because women are stereotypically viewed as more honest than men.

In legislatures, incumbents probably have a better chance of getting caught at inappropriate texting than they are of losing reelection. And we know that when incumbents do lose, it’s because their challengers surpassed the fundraising threshold that could match the incumbent’s advantages in media coverage, name recognition, and other factors, no matter how much the incumbent spent.

But journalists and their audiences don’t usually pay attention to political science research when they ask about electability.

Looking at polls, money and mirrors

In their search to identify the most electable candidate, journalists and their readers look at polls which, early in a campaign, often say more about a candidate’s name recognition than his or her public support. They look at fundraising numbers. The biggest fundraiser doesn’t always win – ask President Bloomberg – but money is one indicator of public support.

And journalists and readers listen to themselves. Many people are convinced that regardless of these indicators, the candidate they like better – or dislike least – will win the election. That was true of many Hillary Clinton supporters in 2016, who simply couldn’t accept that Donald Trump could become president.

It is bolstered by “confirmation bias” – the tendency to seek out and remember bits of information that confirm your existing opinions. This tendency is nothing new.

In 1964, supporters of conservative Republican presidential candidate Barry Goldwater believed that their man was destined to win, because an invisible – except to them – conservative majority would emerge on Election Day. Goldwater lost in a landslide.

A similar tendency is seen today in many Sanders enthusiasts. They picture an army of leftists who refuse to vote currently because they are disgusted with corporate influence over American life, including overly conservative Democratic candidates. Sanders fans believe that many of these nonvoters will step up to the polls once they see Sanders’ commitment to genuinely progressive values.

The problem with this kind of thinking about electability is the evidence – the lack of it.

A large recent survey showed that nonvoters don’t differ much from voters, other than in their lack of engagement with politics.

“Nonvoters are also far less progressive than is commonly believed,” wrote Yascha Mounk in The Atlantic. “A clear majority of them consider themselves either moderate or conservative; only one in five say that they are liberal.”

Democrats often hope that young people, who lean Democratic, will finally overcome their habit of nonvoting. But even in the high-turnout midterm elections of 2018, people under 30 voted at much lower rates than people over 65. In the recent Texas Democratic primary, Sanders won most Latino American voters under 30, but older Latino Americans, who favored Biden, turned out in larger numbers.

Who, then, is an electable candidate?

First, it’s a candidate whose advisers understand the rules of the election they’re competing in now.

For example: The Democratic Party has outlawed winner-take-all nominating events. Any candidate who wins at least 15% of the vote in a primary or caucus gets about the same percentage of delegates from that state as he or she did in the popular vote.

That means a candidate who is ahead in the delegate count midway through the nominating season will be hard to beat later. An opponent can’t catch up as easily by getting a huge infusion of delegates from a late state contest, because the front-runner will pick up a share of that state’s delegates as well; there is no 3-point shot in Democratic nomination politics.

The Democrat who is most electable in the Indiana Democratic primary will not be the winner of Indiana’s electoral votes in November, because the Indiana electorate in November will be dominated by Republicans.

Beating Trump will require very high turnout among Democrats, depressed turnout among Republicans, and enthusiasm among the fairly small group of swing voters who have managed to avoid the polarization of current American politics.

Voter turnout is most common among the people who habitually vote: the two parties’ existing voter bases. So an electable candidate is one who excites that party’s existing voter base but doesn’t rile up the opposing party’s base to an unusual degree.

For most primary voters, however, the most electable candidate is whichever candidate that voter favors.