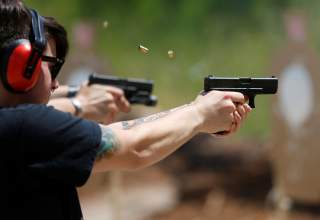 The Supreme Court will return Monday for oral arguments in what is shaping up to be a blockbuster term.

During the high court’s two-week December sitting, the justices will hear arguments in some important cases, including ones regarding the Second Amendment and Obamacare.

Later in the term, the Supreme Court also will consider cases involving school choice, abortion, and the president’s ability to fire the head of an “independent” agency.

The justices may decide to hear a challenge to the House Oversight and Reform Committee’s attempt to subpoena President Donald Trump’s tax records.

In District of Columbia v. Heller (2008) and McDonald v. City of Chicago (2010), the court ruled that the Second Amendment is not a collective right enjoyed only by state militias, but an individual right that applies to both the federal government and the states.

Up until now, the court has turned down many opportunities to hear cases raising related issues, such as what standard of review courts should use to judge restrictions on gun rights; what types of firearms, ammunition, and magazines states may prohibit; and whether states may require applicants for a concealed carry permit to show a “good cause” or “justifiable need” before obtaining a permit.

The case to be argued Monday involves New York City’s ban on the transportation of licensed handguns anywhere within city limits except to gun ranges. The city required residents to obtain a “premises license” in order to possess a handgun in their home or transport it to one of seven gun ranges.

Under these regulations, residents were not permitted to transport a licensed handgun outside the city.

Not surprisingly, members of a local shooting club challenged these restrictions. They argued that the restrictions fail any level of scrutiny under the Constitution, burden the fundamental right to travel, and violate the Constitution’s commerce clause by controlling economic activity beyond the city’s borders.

District and appellate courts both ruled in favor of the city. Once the Supreme Court granted review of the case, however, New York City amended the regulations to allow residents with a premises license to transport their handguns to another residence within or outside the city and to gun ranges outside the city.

Such a ruling would prevent the city from changing course in the future.

The New York case does not present the justices with the opportunity to rule on broader issues that have percolated in the lower courts since the Heller and McDonald decisions. Nevertheless, the fact that the justices will hear the case is a step in the right direction, hopefully providing lower courts guidance they sorely need.

On Dec. 10, the justices will hear three consolidated cases stemming from the Patient Protection and Affordable Care Act, popularly known as Obamacare.

The cases challenge the federal government’s failure to reimburse health insurance providers for losses they incurred by offering insurance coverage, consistent with the Affordable Care Act, to those who previously were uninsured or had preexisting conditions.

In passing the Affordable Care Act in 2010, Congress set up a program to incentivize insurers to offer coverage to people considered “risky” from an insurance perspective. The program required insurers to pay a portion of any savings into it if their costs were lower than expected, and the government would reimburse insurers for a portion of their losses for three years if costs were higher than expected.

Insurers paid roughly $482 million into the program from 2014 to 2016. Following the formula Congress came up with, the government owed insurers nearly $12 billion.

As a result of the dramatically higher costs, 18 of 24 insurers went out of business and several others stopped offering coverage through the insurance exchanges. This led to skyrocketing costs, less competition, and fewer coverage options.

Several insurers sued the government for damages, arguing that it had breached an implied contract and violated the statute. The lower court ruled that through the appropriations riders, Congress had impliedly repealed the Obamacare provision setting up the program and that the statute lacked the language necessary to bind the government in a contract.

At the Supreme Court, the insurers argue that the government’s roughly $12 billion bait and switch will endanger public-private partnerships in the future if the government can induce massive reliance by private parties and then fail to hold up its end of the bargain.

They also point out that Congress did not repeal the Obamacare provision setting up the program; instead, it limited the source of funding, which did not eliminate the government’s financial obligation.

The government maintains that Congress did not create an entitlement that insurers are owed, but simply set up a program that would be “budget neutral”—entirely funded by insurers’ payments. The government also contends that a strong presumption exists against treating statutes like contracts, since statutes are inherently subject to change.

This is the fifth case stemming from the Affordable Care Act to reach the Supreme Court, and a sixth one may be on its way soon.

The handgun and Obamacare cases are two of the significant cases the Supreme Court will hear in December. The justices likely will issue decisions in all of this term’s cases by the end of June.

This piece appeared in The Daily Signal on November 27, 2019.