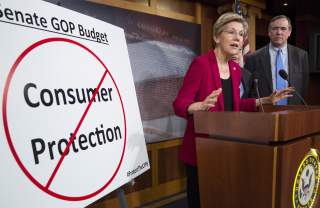 The Supreme Court announced Friday that it will hear a constitutional challenge to the structure of the Consumer Financial Protection Bureau (CFPB), a watchdog agency whose existence is largely credited to Massachusetts Democratic. Sen. Elizabeth Warren.

The bureau is arranged to insulate its employees from political pressure and ensure its independence from big banks and financial institutions. At issue in Friday’s dispute is a provision forbidding the president from removing the bureau’s director except for “inefficiency, neglect of duty, or malfeasance in office.”

“Vesting such power in a single person not answerable to the president represents a stark departure from the Constitution’s framework,” the Trump administration told the justices in court filings.

The 2010 Dodd-Frank Wall Street Reform and Consumer Protection Act chartered the CFPB. In a short Friday order, the justices also asked the parties to address whether the contested removal provision can be severed from the rest of the Dodd-Frank law.