Surprise! The F-117 Nighthawk Stealth Fighter Is Back in Action 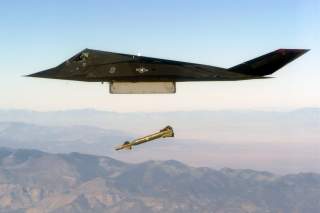 Eleven years after the U.S. Air Force retired the type, an F-117 Nighthawk stealth fighter has made yet another public appearance. Dismantled and being hauled across the American West on a tractor-trailer.

Photographer Chris McGreevy spotted the truck and its F-117 cargo on Aug. 16, 2019 on Columbia Way near the Palmdale Regional Airport outside Palmdale, California.

“It was just outside USAF Plant 42 in Palmdale,” McGreevy told The Aviationist reporter Tom Demerly. “I’m guessing they trucked it down from Tonopah to Palmdale so it can be demilitarized and eventually be put on display somewhere. Removing all the avionics, internals, [radar-absorbing material] and hollowing her out.”

“Given it is disassembled, I’m guessing this airframe is one of the ones that have been stored in the climate-controlled hangars at Tonopah [test range in Nevada],” McGreevy added.

The F-117 entered service in the mid-1980s and most famously led deep strike missions targeting Iraqi forces during the 1991 Gulf War. The U.S. Air Force in 2008 officially retired the roughly 50 surviving airframes.

“Some isolated accounts suggested the aircraft may have participated in advanced testing in the classified test ranges north of Las Vegas,” Demerly wrote.

Earlier this year, on Feb. 26, 2019, photographer Richard VanderMeulen shot remarkable photos of a single, unmarked, F-117A that was flying over the restricted air space R-2508 range complex near Death Valley in southern California.

The photos, first published in Combat Aircraft, were remarkably good. They showed an F-117 with partially worn or obscured markings flying at low altitude around the desert hillocks and mountains. The aircraft made another brief appearance the next day.

In another noteworthy sighting, an F-117 fuselage being transported on a truck trailer was seen back on Nov. 14, 2017.

The February 2017 sighting was notable for taking place outside of the air space around Tonopah Test Range, the F-117’s usual haunt. Also, the Nighthawk appeared in the company of two F-16s.

“The F-16s may very well have been putting a new infrared search-and-track pod to the test or some other sensor system, or maybe they were just all out for a flight through the area to keep up basic competency,” The War Zone editor and aviation expert Tyler wrote. “We just don't know.”

“The F-117s are slowly disappearing into the abyss. Congress's former mandate to keep the fleet of roughly 52 jets in Type 1000 regenerative storage indefinitely at the high-security Tonopah Test Range Airport has ended.”

“Four of the iconic 'Black Jets' will be removed from storage each year and disposed of in a way that remains undisclosed even though the process has been underway now for a couple years. As such, the 2020s will mark a final end to the game-changing Nighthawk's amazing story.”