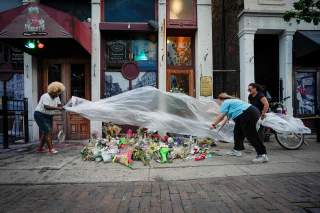 A survivor of Sunday’s mass shooting in Dayton, Ohio, reportedly sheltered hundreds of people by ushering them into a bar to shield them from the gunman’s fire.

Jeremy Ganger, the bouncer at a bar called Ned Peppers, says he took as many people as he could into the bar and guarded the doorway as the gunmanopened fire outside, ABC News reports. He says he came face-to-face with alleged gunman, Connor Betts, 24, just before police fatally shot him.

“I looked at him right in the face. He had a dead stare,” Ganger recounted.

“When he got to the door, I saw an officer over to the side of the street and I looked up, I looked at the guy and I said ‘I hope the cop gets him before he gets me,’ because he wasn’t coming in our club,” he explained.

“Our patrons are more important than one active shooter, so I was going to try to stand my ground the best I could,” he continued.

Granger said his instincts took over as he ushered people in to the bar to safety. There were reportedly more than 200 people in the bar by the end of the shooting.

“I could see him coming our way and I started getting people as fast as I could,” Granger described.

“I was grabbing them as fast as I could. Best I could. And then watched a few people get hit,” he continued.

Officers fatally shot the shooter within 30 seconds of him firing his first shot, according to ABC.