Sweden's Gripen Fighter Is One Tough (And Cheap) Weapon of War 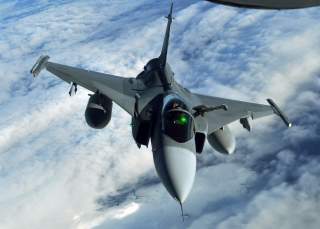 Key point: One of the largest factors for Gripen adoption is the very low flight hour cost.

The JAS-39 Gripen is the Swedish defense industry’s largest export, financially. The Gripen has seen considerable success replacing aging fighters in former Warsaw Pact countries, and has also seen sales in Africa, the Americas and Asia. But why is the Gripen successful on the export market? How does it stack up against other NATO products and Soviet jets?

In the post-Soviet states, a common thread is the replacement of the MiG-29 as a fighter aircraft. While the MiG-29 as evaluated by the U.S. Air Force and postreunification Luftwaffe to be a competent “knife-fight” dogfighter, it was considered to be lacking when it came to independent intercept and beyond-visual-range capability. Practically every Warsaw Pact state operated these aircraft as their front-line fighters, with the Soviet Union reserving the more advanced Su-27S “Flanker” aircraft for themselves. Thus, the MiG-29 quickly became obsolete in the air forces of Poland, Hungary, Czechia, Slovakia and Bulgaria, necessitating a replacement. The Hungarian Air Force decided to acquire Gripens in 2003, with Czechia following in 2005. Slovakia is finally replacing their MiGs in 2018, with the decision down to the Gripen or the F-16. The F-16 is said to be more expensive. Bulgaria is in a similar situation, with the Eurofighter and F/A-18 also in consideration. Poland decided to acquire F-16s instead, probably due to their close relations with the United States. For small European countries on a budget, the Gripen makes a lot of sense. Due to the smaller area of patrol, a dual-engine design is not as necessary as it is in Finland or Canada (both of which operate F/A-18s, a dual-engine design). The lower combat range and external stores are less of an issue, as aircraft can be expected to rapidly return to their home bases to rearm. The Gripen has relatively modern radars and navigation systems compared to the MiG and has integration with export-cleared American missiles (in the C and D “export-ready” variants). Probably one of the largest factors for Gripen adoption is the very low flight hour cost. Gripens were rated by Jane’s to have a cost of around $4700 per flight hour. Next cheapest was the F-16 at $7000 per flight hour. Other European designs and the F/A-18 go over $10,000 per flight hour. Given that the MiG-29 has flight hour cost of around $4500 per flight hour, the Gripen is a logical choice to keep sustainment budgets from growing too much relative to past jets.