Switzerland Needs To Replace Its F-5 Tigers, Does The F-35 Fit The Bill? 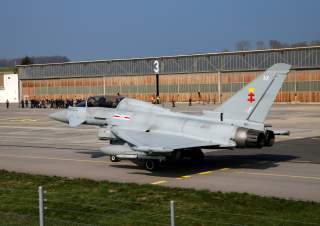 The service in 2019 plans to remove from service 27 Tigers. The Tigers that remain will perform limited duties. “The air force flies the F-5 Tiger as the aggressor during exercises with the F/A-18, and the single-engine jet also makes up the Patrouille Swiss air display team,” Defense News reported. “The 26-strong fleet of F-5s no longer flies air patrol.”

The work has left just 10 Hornets in service. "Two aircraft were constantly on quick-reaction alert and four aircraft were participating in the Frisian Flag exercise at Leeuwarden [in] The Netherlands. So four aircraft were available for regular tasks like training. The Swiss air force and RUAG are doing everything they can to increase the readiness, as both have stated."

The Swiss air arm famously operates F/A-18s and F-5s from highly-defensible, secret mountain bases. Defense News in March 2018 witnessed one mountain deployment. "The pilot flies an air patrol, returns and lands just outside the base. A crane rotates the F/A-18 and places the fighter on a platform, which brings the plane back into military silence under the mountain. The stealthy doors close until the next flight."

The new fighter might not fly from the same secret bases, a Swiss officer told Defense News. "Asked whether the upcoming Swiss tender as part of the drive sets a key requirement for a fighter to be able to enter that base, the officer said it was not essential but would be nice to have."