Switzerland Will Get Rid of 27 F-5 Fighters 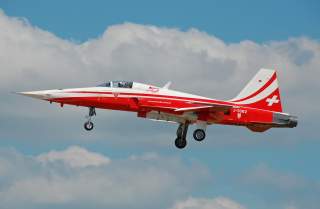 The purchasing of new fighter planes stalled after the Swiss people voted against the acquisition of 22 JAS-39 Gripen fighter jets in 2014.

The Swiss military has indicated of its desire to retire 27 Northrop F-5s from service. Four aircraft have already been donated to museums.

The rest have been grounded and buyers have been found. Switzerland will be left with 26 active F-5s. These aircraft will flank the Swiss Air Force F/A-18 Hornets until the acquisition of new fighter jets.

The selection of the new aircraft will be based on a report prepared by a group of experts who will evaluate several fighter jets, specifically the JAS-39 Gripen, the Eurofighter Typhoon, the Dassault Rafale, the Boeing F/A-18 Super Hornet and the Lockheed Martin F-35 Lightning II.

The purchasing of new fighter planes stalled after the Swiss people voted against the acquisition of 22 JAS-39 Gripen fighter jets in 2014.

The F/A-18 fighter jets, which perform Quick Reaction Alert (QRA) service to defend Switzerland’s airspace, will reach the end of their lifespans of 5,000 flight hours in 2025. In its new fighter jet strategy, the country will extend their flight hours to 6,000 by evaluating and reinforcing structural weaknesses as well as replacing certain parts of the jets.

The F-5 is an agile, highly maneuverable, reliable supersonic fighter, combining advanced aerodynamic design, engine performance and low operating costs. More than 2,600 were built by Northrop and under co-production and licensing agreements with Canada, the Republic of China, the Republic of Korea, Spain and Switzerland.

Since two-thirds of F-5 user countries also operate F-16s, F/A-18s, F-15s or Mirage aircraft, the F-5’s role has shifted from a prime fighter to a lead-in trainer.