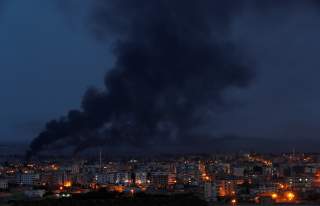 Two U.S. jet fighters bombed an American military base in Syria Wednesday to keep Turkey from taking control of the facility, the U.S. military said.

The decision to conduct a pre-planned airstrike on the base formerly used to train U.S.-allied Kurdish fighters — LaFarge Cement Factory — came after Turkish fighters began to move in on the facility, according to Col. Myles Caggins, a spokesman for the U.S.-led campaign against the Islamic State.

The airstrikes were meant to “reduce the facility’s military usefulness” for Turkey, a NATO ally, after President Donald Trump announced the withdrawal of roughly 1,000 U.S. soldiers from the region on Oct. 6, Caggins wrote in a Wednesday tweet, The Wall Street Journal reported.

On Oct. 16, after all #Coalition personnel and essential tactical equipment departed, two Coalition F-15Es successfully conducted a pre-planned precision airstrike at the Lafarge Cement Factory to destroy an ammunition cache and reduce the facility’s military usefulness.

Kurdish fighters who were occupying the base set fire to their portion of the facility and fled as the Turkish fighters made their way toward the area, Caggins said, the Journal reported.

Vice President Mike Pence and Secretary of State Mike Pompeo arrived in Ankara, Turkey, Thursday to “voice the United States’ commitment to reach an immediate ceasefire and the conditions for a negotiated settlement,” a Tuesday press release from the Office of the Vice President read.

Pence said in a Wednesday tweet that he is “honored to be leading a delegation to Turkey on behalf of [Trump] with [Pompeo].”

Honored to be leading a delegation to Turkey on behalf of @realDonaldTrump with @SecPompeo. pic.twitter.com/iUNXuUYnWd