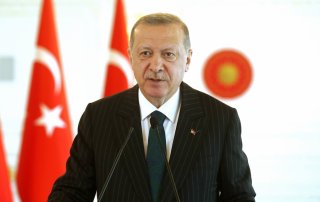 In Shakespeare’s “Romeo and Juliet,” Juliet asks Romeo, “What’s in a name? That which we call a rose by any other name would smell just as sweet.” Perhaps. But when it comes to renaming Turkey, there is a world of difference.

In December 2021, Turkey’s President Recep Tayyip Erdogan promulgated the use of “Türkiye” as Turkey’s new brand name in a move to convey the Turkish nation’s culture, civilization, and values in the best way possible. Following an official letter from Turkish foreign minister Mevlut Cavusoglu, Turkey’s name was officially changed at the United Nations last June.

Whether or not the name change will have any effect on Turkey’s international standing or image is an open question, but the U.S. State Department has gone along with the spelling at its NATO ally’s request, also as a conciliatory gesture before Cavusoglu’s visit later this month.

In Turkey’s (or rather, Türkiye’s) case, it is an assertion of Turkey’s new identity, “the new Turkey” under Erdogan, and disassociation from the North American bird. It is also part of the buildup to the celebration of the centenary of the Turkish republic on October 29, 2023.

However, seen through the eyes of former Turkish ideologue (as well as foreign minister and prime minister) Ahmet Davutoglu, this century was “a parenthesis” which paved the way for the restoration of Turkey’s Islamic identity under the AK (Justice and Development) Party’s regime.

In a keynote speech at the Istanbul Forum in 2012, Islamic scholar Ibrahim Kalin, who is now Erdogan’s chief advisor and spokesperson, rejected the Western-centric political and economic order and claimed Turkey had been propelled into a pivotal place in the new geopolitics.

In March, Kalin reiterated his call for a new security architecture at the Qatar Forum.

This is in keeping with the views expressed by Russia’s President Vladmir Putin at a plenary session of the Valdai Club in October, where he spoke of “a doctrinal crisis of the neoliberal American-style model of international order” and the construction of a multipolar world order with new centers.

In his address to the National People’s Congress in Beijing in March 2021, Chinese president Xi Jinping spoke of this shift in the geostrategic landscape and the rise of a China-centric order with its own norms and values.

In a recent webinar at the Jerusalem Institute for Strategy and Security, Mike Doran, a senior fellow at the Hudson Institute, observed that China, Russia, and Iran are aligning to undermine the American order globally. He added: “Reality is beating on the door of the Biden administration and it will have to deal with it.” This also applies to the GOP.

Doran also saw Turkey as the bulwark of a coalition to take counter-measures against Iran—but nothing could be further from the truth. As the Halkbank case has demonstrated, where Turkey is indicted for channeling more than $20 billion to Iran in violation of U.S. sanctions, Turkey is in cahoots with Iran. We should also not to forget the July summit in Tehran, where Russia, Turkey, and Iran affirmed their cooperation.

Erdogan’s prominent role at the summit of the Shanghai Cooperation Organization in Samarkand, where he was a special guest, confirms what Kalin claimed about Turkey’s pivotal position in the new geopolitics. Erdogan has also stated that Turkey intends to become a member.

In dealing with Turkey, the United States needs a long spoon. At present, Turkey has with some success utilized both its geographical and political position in the war in Ukraine. Erdogan claims Turkey has averted a grave crisis for humanity by brokering the resumption of grain shipments, but like Switzerland in World War II, it has reaped the benefits of its purported neutrality.

The number of Turkish residence permits for Russians has more than doubled since 2021 and Russians now top the list. It is estimated that Russian and Iranian businessmen have brought a significant amount of assets to Turkey, which will undoubtedly benefit its cash-strapped economy.

Facing an election in June—although there is talk of advancing the date—Erdogan is in desperate need of a boost. He has already played the national security card with the threat of a missile strike on Athens and a planned cross-border operation into Syria to target America’s Kurdish allies. Washington should resist the temptation to offer Turkey any encouragement.

Robert Ellis is an international advisor at the Research Institute for European and American Studies in Athens.