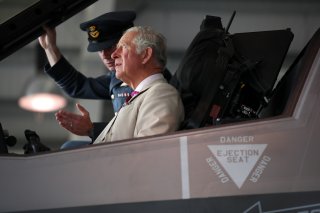 The Air Force has formally activated its first European-based F-35A Squadron at Royal Air Force Lakenheath in the UK. This is part of the military service’s plan to fast-track multinational connectivity, improve responsiveness and help establish a continental deterrence presence.

The squadron, according to Air Force Television, will include twenty-seven aircraft and roughly sixty personnel to accelerate joint U.S.-UK training opportunities. The Air Force plans to send a healthy number of F-35 fighter jets to Europe as part of a decided effort to strengthen its ability to deter potential Russian provocations.

This initial step is a key part of an Air Force and Defense Department strategy to leverage a fast-growing force of European F-35 fighter jets. The scope and depth of a U.S.-NATO-Europe F-35 force continues to gather momentum due to various developments. These developments include Switzerland’s choice to arm itself with F-35 jets, the first F-35 jets arriving in Denmark, progress with Poland’s F-35 order and ongoing operations with other European allies. Norway pilots have been flying F-35 jets for quite some time as having UK pilots.

The Air Force chose the UK because its infrastructure was able to house the aircraft and accommodate growing interoperability with U.S. forces. As recently as last summer, U.S. F-35B jets operated in close coordination with UK F-35s on board the British carrier HMS Queen Elizabeth. European-based F-35 jets can form somewhat of a protective envelope for the continent and help keep Russian movements in check along its border with Eastern Europe. Given how F-35 jets are engineered to seamlessly network with one another using a multifunction advanced datalink that allows for real-time, dispersed, yet secure information sharing across multinational formations of F-35 jets.

Basing Air Force F-35A jets in the UK creates several tactical advantages as it affords the possibility of a combined U.S.-UK F-35 force to quickly access the Baltic Sea and operate over both land and maritime environments. The F-35s in two countries could easily reach the European continent and quickly link with Norwegian or Danish F-35s in Northern Europe too. Additionally, the UK’s F-35 jets could easily support carrier strike groups operating off the shore in the Atlantic, North Sea or Baltic region by providing close air support for amphibious missions or the suppression of enemy air defenses. It makes sense that the UK would be the jumping point for basing U.S. F-35 jets and then expanding to bases in Poland or parts of Eastern Europe near Russia.

In the event of any kind of major warfare engagement anywhere on the European continent, America’s forward-positioned F-35 jets can change the size, reach and scope of any combat mission. Given the progress that Russia is making with the Sukhoi Su-57 or perhaps the new Russian Checkmate when ready, Russia might be in a position to challenge a single F-35 jet or small groups of F-35 jets that operate in the vicinity. However, F-35s from multiple different countries and positions of strategic advantage can help achieve and maintain air supremacy by outmatching an adversary in terms of both numbers and superior performance.