Is Taiwan Getting Ready to Build a New Fighter Jet? 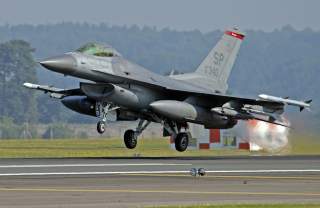 The $2.2-billion Blue Magpie program, which aims to build 66 high-performance training planes for the Taiwanese air force, could help to sustain the island country’s aerospace industry as it struggles to maintain a large and aging fleet of fighters.

Diplomatic pressure from China complicates Taiwan’s efforts to acquire warplanes from foreign manufacturers. Taipei for years has asked to buy new F-16s from U.S. firm Lockheed Martin, but the administrations of several U.S. presidents have rejected the request.

The Taiwanese air force in 2008 first proposed to buy new training jets to replace decades-old AT-3 and F-5 lead-in fighters. The air arm considered several foreign designs. But Pres. Tsai Ing-wen, who won election in 2016, made it her policy to develop the local defense industry.

The air force pivoted to the Blue Magpie, a development of AIDC’s Indigenous Defense Fighter, which entered service with the Taiwanese air force in 1997.

ADIC reportedly assembled a team of 300 people to develop the new trainer. “AIDC is to design models to undergo wind tunnel testing in the US and other tests in Taiwan, with the first Blue Magpie prototype to be built by 2019 and the first trial flight set for 2020,” Taipei Times reported.

Blue Magpie indirectly benefits from American help. “The IDF was produced with the technical assistance of several U.S. companies, including General Dynamics Corp., which helped with the frame; Hughes Corp., which designed the engine; and Westinghouse Co, which produced the avionics system,” Taipei Times noted.

If the scale model is accurate, the Blue Magpie will lack an internal cannon as well as wingtip rails for air-to-air missiles. Those design choices point to an unarmed trainer that might not have a front-line role during wartime.

Taiwan’s fighter fleet -- 25 F-5s, 46 Mirage 2000s, 102 IDFs and 114 F-16s -- would be a prime target during a Chinese invasion attempt. China could strike Taiwanese bases with hundreds of ballistic missiles during the early hours of an attack. Hundreds of Chinese warplanes quickly could deploy in Taiwanese air space.

Taipei’s efforts to sustain its industrial base, including by developing warplanes such as the Blue Magpie, mean Taiwan in theory can continue to equip its forces with modern weaponry.

Chinese forces are at least as sophisticated and easily outnumber Taiwan’s own forces. But that doesn’t mean China easily could conquer Taiwan. “An attempt to invade Taiwan would likely strain China’s armed forces and invite international intervention,” according to the 2019 edition of the U.S. Defense Department’s annual report on Chinese military developments.

“China has an array of options for a Taiwan campaign, ranging from an air and maritime blockade to a full-scale amphibious invasion to seize and occupy some or all of Taiwan or its offshore islands,” the report continued.

Invading Taiwan would require large numbers of ships to cross the heavily-defended Taiwan Strait. As of 2019, China doesn’t have them. “There is no indication China is significantly expanding its landing ship force necessary for an amphibious assault on Taiwan,” the Pentagon noted.

Even building more ships wouldn’t ensure victory for China. “Large-scale amphibious invasion is one of the most complicated and difficult military operations,” the American report warned. “Success depends upon air and maritime superiority, the rapid buildup and sustainment of supplies onshore and uninterrupted support.”

Maintaining an aerospace industrial base is just one part of Taiwan’s defense strategy. Geography and politics arguably are more important. Even so, Taipei seems determined to build a new jet trainer. Just in case it someday also needs to build new fighters.