Taiwan Was Having a Terrific U.S.-China Trade War Until Coronavirus Arrived 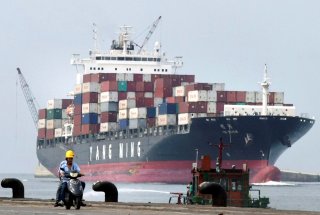 Before the coronavirus hit, Taiwan’s 2019 headline growth figures were nothing short of stellar. Its economy grew at an impressive 3.31 percent during the fourth quarter of 2019, propelling President Tsai Ing-Wen into her second term on a high note and giving Taiwan businesses a boost.

But that success owed much to one fact: bluntly stated, Taiwan was having a terrific U.S.-China trade war.

A United Nations Commission on Trade and Development (UNCTAD) report has found that no economy had been benefiting more from trade diversion in the face of unilateral, reciprocal, and retaliatory U.S. and Chinese tariffs. Better still, tariffs have precipitated the return of some of the many Taiwan-based manufacturers who relocated to mainland China in prior decades and were thought to have left for good.

But the good news ends there.

For one thing, Taiwan will need to deal with the aftermath of the coronavirus pandemic. But even without the challenges of the pandemic, the benefits of trade diversion and supply chain restructuring belie underlying challenges that the trade war exposed. In particular, the conflict has given new urgency to the competition among every advanced economy for a share of the next-generation industries that will shape the future.

Taiwan has been a leader in innovation, but its strengths remain concentrated in legacy industries, mostly dominated by hardware. Yet the next-generation fields that will redefine the global economy are being shaped by the integration of both hardware and software.

As a result, Taiwan is a victim of its past success—dominating important industries, such as semiconductors, but underinvesting in the new fields that will alter the future of work, industry, service delivery, and defense.

But this longer-term challenge is getting lost amid an intensifying focus on the crisis of the moment: even as Taiwan risks falling behind in emerging areas, it is increasingly caught in the U.S.-China crossfire over access to Taiwan’s critical hardware. TSMC, the world’s leading contract chipmaker, faces strong and growing pressure from Washington to end its commercial relationship with Huawei, Beijing’s telecom national champion, and move production from Taiwan to the United States. For its part, Beijing has made aggressive moves to promote self-sufficiency in semiconductors.

As this competition intensifies, Taiwan cannot afford to lose sight of the bigger picture: TSMC and other hardware companies remain vital to Taiwan’s success but the broader innovation ecosystem has struggled to reorient from semiconductor and chipset design and fabrication toward future-facing industries, from artificial intelligence to biotechnology to new areas of computing.

Taiwan owes its past success to a three-legged model: smart government competition policy, aggressive internationalization, and the incubation of an independent innovation capability. This yielded a highly decentralized and competitive manufacturing ecosystem and promoted Taiwan’s leadership in semiconductor design and production, contributing to a flourishing period for its information and communications technology manufacturing during the 1980s and 1990s.

By the 2000s, however, this terrifically successful model was increasingly buffeted by significant changes to Taiwan’s twin relationships with China and the United States:

With China, much R&D remained in Taiwan but many hardware manufacturing supply chains shifted across the Taiwan Strait, especially to the Pearl River Delta in Guangdong province and the greater Shanghai region, because of cost advantages and the unique manufacturing ecosystem in Shenzhen.

In the United States, meanwhile, innovators increasingly shifted their focus away from hardware toward software—a shift that yielded new pressures on Taiwan’s hardware-dominant technology and innovation industries.

To its credit, Tsai’s administration has recognized these developments, and its “Asian Silicon Valley” project, launched in 2016, represents a concerted effort to jumpstart indigenous Taiwan innovation. Private sector initiatives like the Taiwan Startup Stadium also aim to revamp and internationalize a startup ecosystem that remains overwhelmingly focused on Taiwan’s small domestic market.

Yet, these positive trends do not go far enough. Stan Shih, the founder of Acer and head of the Internet-of-Things division for the Asian Silicon Valley project, has warned that the plan “is short-sighted.”

In short, to truly reassert its status as an innovation leader, Taiwan must overcome its deep reliance on legacy industries and carve out a new niche in future-oriented fields.

But unfortunately, Taiwan’s dependence on hardware has only become more acute over the past decade, even as the emerging and foundational industries of the future are increasingly being defined by hardware-software integration. Ministry of Finance (MOF) data shows that advanced technology-related devices comprised a staggering 46 percent of Taiwan’s total exports for the first ten months of 2017, with semiconductors alone accounting for 29.1 percent that year.

A new report from the Carnegie Endowment and the Chung-Hua Institution for Economic Research argues that there will be a premium—and a substantial payoff—for the technology-intensive economies best able to prioritize hardware-software integration. For Taiwan to achieve this, boosting government research spending and administering a steady supply of “patient capital” should be major priorities. Taiwan government R&D has been nearly flat for the past decade, and the public sector’s contribution to total R&D has plummeted to just 20 percent.

Research funding must not only increase but also be deployed in a strategic and targeted way. To emerge as an industry hub, Taiwan’s government should direct these funds toward long-term investments in knowledge-based industries of the future—for instance, those touching cybersecurity, big data, and such areas of artificial intelligence as machine learning and natural language processing.

Take education, for example: investing in general STEM training is not enough; Taiwan must reorient the talent pool toward emerging areas, such as computer and data sciences, rather than concentrating on legacy fields connected to semiconductor design, such as electrical engineering, which is where, as the Carnegie report shows, the STEM talent pool remains disproportionately based.

Of course, shifting away from a legacy ecosystem will not be easy, but there are useful models of successful adaptation whose features Taiwan could emulate: Economies such as Israel and Estonia have capitalized on these trends by forging niche advantages in cybersecurity and other new software-related industries. Singapore likewise aspires to be a fintech data hub.

These smaller economies have been able to overcome their modest domestic scale by prioritizing sectors, capabilities, and specific parts of the global knowledge industry value chain. Their success demonstrates that small economies can be globally competitive if they both prioritize hardware-software integration and decisively pursue specialization.

The good news is that Taiwan’s strengths in hardware are a necessary prerequisite to integrating new-generation software advances into future hardware advances. For instance, Taiwan could have an opportunity to begin crafting the infrastructure of the bioeconomy through a focus on the biochip as infrastructure. Such a technology integrates hardware, firmware, and software and could enable a huge new swath of the next-generation economy.

And Taiwan could make data a comparative advantage by building on its role as a regional leader in data protection and privacy standards. Data quantity matters and gives big economies like the United States, Japan, and China obvious scale advantages. But so too do data processing, synthesis, and deployment. Taiwan has strong laws in place, especially when compared to those in China and Southeast Asia and will also have a unique opening because of the growing aversion in some economies, not least the United States, to Chinese-origin AI technologies. This could allow Taiwan to position itself as a trusted vendor and tester of new high-tech products.

Without question, Taiwan’s comparative advantage in hardware is pivotal. But this, by itself, will not set Taiwan up for the industrial and technological challenges of the future. The infrastructure and tools of the next-generation economy still need to be designed and developed, so the time for Taiwan to educate and build in this space is now.