Taking Over Supply Chains Was China's Plan All Along 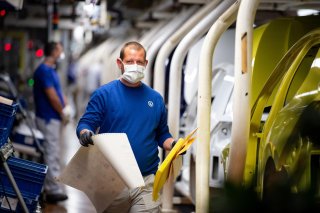 “You can’t get a product. You are not going to get a product for months.” That’s what Brian Edwards, a medical supplier in California, has been telling dozens of people per day when they call searching for critical medical supplies that, before this year, they took for granted would be in stock.

The Chinese government’s mismanagement of the novel coronavirus not only spread the virus worldwide, it shut down many supply chains that the U.S. and other countries had become accustomed to; indeed, that the U.S. deeply relied upon. As we consider how our post-pandemic country will look, we should be careful to avoid a repeat of these mistakes.

U.S. dependence on Chinese manufacturing was no accident. The Chinese government’s “Made in China 2025” strategy to consolidate manufacturing supply chains and impose itself as the world’s preeminent source of high-value manufactured goods has been well-known for years. While we have neglected to safeguard our industrial base, Beijing was aggressively subsidizing its country’s manufacturing plants and creating supply chains that maximized its economic and geopolitical leverage.

Some of my colleagues and I have worked the White House and the Department of Defense in the last two years to restrict purchases of Chinese-manufactured critical materials for use in U.S. military systems, and the Federal Communications Commission and other agencies have taken the first steps to stop Huawei and related entities from dominating next-generation communications hardware. But the COVID-19 crisis demonstrates that a broader approach is needed.

The U.S. government should develop better, near-real-time insight into supply chains. Occasional reviews of individual supply chains create blind spots that major crises will reach unexpectedly. With the tools that are out there, it should be easier than ever for the government and its critical suppliers to share data to provide resiliency and security.

The government also needs to take the lead in maintaining and expanding critical American supply capabilities. It will be crucial to prevent the pennies-on-the-dollar purchase of distressed American assets during or immediately after the pandemic by firms linked to the Chinese government. This includes many major Chinese firms (such as Huawei). The country that knowingly took steps that allowed the disease to spread worldwide should not be allowed to financially benefit from those decisions.

At the same time, the government should ensure that American businesses get the liquidity and capital they need to maintain and expand critical supply chains within the United States. This can be done through direct investment into manufacturing plants, but it could also be done by making purchase agreements and building national stockpiles of needed supplies. The much-discussed Defense Production Act allows the federal government to both expand and ensure manufacturing capabilities, and the $1 billion that Congress provided to the DPA program in the CARES Act should be promptly supplemented with the direction that the government identify gaps and fragile sectors of supply chains and build capacity to bulwark them against future crises.

Though the current focus is, deservedly, on China, we should not think that there are no other foreign countries that seek to identify, develop, and exploit critical gaps in U.S. supply chains. Russia has always been a leader in the production of critical defense materials and a known bad actor on the global stage. Indian companies are routinely cited by U.S. authorities for dumping materials in critical and noncritical sectors of the economy. As we have seen recently with everything from thermometers to toilet paper, though, the supply chains that we rely on for our normal lives can be stressed in any number of ways.

A strong national approach to securing our manufacturing base is a necessary step for security and prosperity. The federal government is the only entity both large enough and focused enough to lead this effort. Congress should, therefore, act quickly, as soon as the next stimulus bill, to establish a supply chain monitoring and investment framework that will get America back to work and provide for a cohesive and united future.

Republican Jim Banks represents Indiana's 3rd District in the U.S. House of Representatives. He is the Chair of the Budget and Spending Task Force on the Republican Study Committee.

This article by Jim Banks first appeared in Real Clear Defense on April 30, 2020.