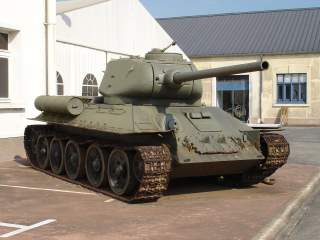 Remarkably, the nearly 80-year-old fighting vehicles until recently were in active service with Lao forces, the Kremlin stated. The swap leaves Taiwan as probably the biggest user of tanks dating to around the time of World War II.

The Lao government shipped the 29-ton T-34s by sea to Vladivostok near Russia's borders with China and North Korea, according to the Russian defense ministry. From there, the vehicles will go by rail to Naro-Fominsk outside Moscow, the Kremlin stated.

"The equipment transferred by the Lao side is planned to be used during the Victory Parades in various cities of Russia, for updating museum exhibits, as well as for making historical films about the Great Patriotic War," according to the Russian defense ministry.

In the first week of its nationwide release on Jan. 1, 2019, the movie raked in more than $15 million, making it the top Russian movie at the time. More than four million people saw the movie in that period, Radio Free Europe reported.

Russian defense minister Sergei Shoigu reportedly traveled to Laos in January 2018 in part to negotiate the return of the fresh batch of old tanks.

The two governments agreed to the transfer while also working out a broader arms deal that signals a new partnership between Russia and Laos. There were reports in December 2018 that Russia had delivered to Laos a number of modern T-72B tanks and Yak-130 light fighters.

The T-34s with their 76-millimeter guns were entirely obsolete in their later decades of service in Laos. While a few poorer countries such as Mali might still possess very small stocks of functional T-34s and an active T-34 appeared in Yemen in 2015, the Lao army was notable for maintaining dozens of T-34s as recently as 2018.

The Kremlin told The Moscow Times the tanks were "in entirely good condition."

A few fighting vehicles of roughly the same vintage as Laos's T-34s remain in use or recently retired from service. In 2016, Paraguay made headlines when it reactivated 10 stored M-4 Sherman tanks, intending to use them for training.

In 2018 the Paraguayans finally retired the last three reactivated M-4s. As recently as 2014 the Paraguayan army reportedly also reactivated a few U.S.-made M-3 light tanks. Some of those vehicles remained in service as of April 2018, according to Jane's.

Taiwan, too, has held on to very old fighting vehicles. Chinese pressure on the world's main tank-builders for decades has blocked Taipei from acquiring new vehicles such as American-made M-1s.

The M-60s are old, but they're hardly Taiwan's oldest fighting vehicles. As late as 2017, the Taiwanese army also possessed 625 M41 Walker Bulldog light tanks, according to the International Institute for Strategic Studies in the United Kingdom.

Taiwan has upgraded its M-41s and M-60A3s along with equally aged M-48s and a hybrid tank that local engineers produced by fitting an M-48's turret to an M-60's chassis and adding the fire-control system. Taipei hopes that a major overhaul of the M-60A3 fleet starting in 2020 will sustain its tank fleet for years to come.

In fact, Taiwan's tanks probably don't stand a chance against China's own fleet of modern tanks. Laos traded its aged fighting vehicles for newer vehicles the first chance it got. Realistically, Taiwan doesn't have the option of doing the same thing.