Tank Killer: Why No Commander Wants to Take On a Spike Missile 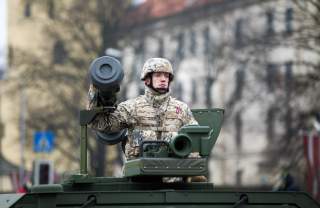 The Spike missile is widely becoming the primary medium infantry anti-tank asset for most of Europe with adoptions by major militaries such as the Polish and German armies.

But how exactly are these missiles being deployed by these countries? What infrastructure have they bought to support them?

In European service, the Spike missile was primary bought (in the MR/LR configuration) to replace aging Milan and Konkurs/Fagot anti-tank guided missile systems. While still effective, these older missiles were considered to be less accurate and powerful than the Spike due to their last-generation guidance technology.

Despite the new functionality, Spikes are being deployed in similar formations to the older ATGMs. Germany is replacing its Milan launchers in an almost one-to-one ratio in its heavy platoons in Gebirgsjäger, Fallschirmjäger and Jäger companies. These companies have a mix of ATGM, sniper and automatic grenade launcher assets and are meant to split into smaller units to support infantry platoons or hold the flanks.

In the Finnish Defense Forces (a rather early adopter of the Spike, buying it in 2000) the Spike’s place in the order of battle depends on what unit it’s in. In the large brigades (Prikaati), there is a separate brigade-level ATGM company (Prikaatin panssarintorjuntaohjus komppania) that uses Spikes and TOW-2s. This company serves a similar purpose to the heavy companies of the Bundeswehr, but it is totally dedicated to tank busting.

There are also smaller mechanized (mekanisoitu taisteluosasto) and motorized (moottoroitu taisteluosasto) battlegroups that are smaller than the larger Prikaati. Informally, they are called Panssariprikaati Lite. These battlegroups have their own organic AT allowance of four Spikes which are attached to the mechanized infantry companies (Panssarijääkärikomppania). These launchers would are operated by a dedicated AT squad in these companies for a flexible but dispersed anti-tank solution.

In Polish service, the missiles are assigned to a specific Anti-Tank platoon. This platoon will have either six launchers in specialized Rosomak-S transports that carry the missiles, launchers and teams, or the Tumak-5, a HMMVW with a Spike-LR launchers. This represents a more mobile specialist force that likely is meant to react to armor breaking through a front line. Unlike German or Finnish units, the Polish AT platoon would probably operate semi-independently.

The consistent theme here is a single dedicated AT “unit” that operates the launchers that is attached to the infantry. The greater mobility of the Spike vs. TOW-type platforms is a significant advantage as it’s more rapidly deployable from vehicles (as seen in the Rosomak-S). While not as mobile as the Javelin, the extended range allows it to perform area denial better than that platform and act as a more advanced version of the Milan.

Also of note is that in a comparison between the Milan and Javelin, Milan operators expressed greater confidence when they could maintain control over the missile after launch, as opposed to the fire and forget nature of the Javelin. As the spike retains the control aspect, it is better poised as a Milan replacement than the Javelin.

However there have been some problems with the Spike. Most reports come from Poland, as it has been a relatively recent purchase for them. The Polish stocks of Spike missiles undergo regular technical inspections by engineers from Rafael, which increases their maintenance cost. Another issue with the original Spike missiles was the missiles were leaving condensation trails when fired in high humidity conditions, which could give away the position of the gunner. This problem was later resolved by Polish engineers and the solution applied to all new Spikes.

In addition to infantry use, Germans mount the Spike-LR on their Puma IFVs, similar to how Milans were mounted on the German Marder 1 IFVs during the Cold War. This appears to be a popular configuration even among countries that don’t field the Spike for their infantry like Czechia.