Taurus 380 Revolver: The Most Compact Revolver on the Market 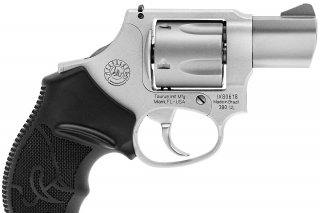 Taurus’s 380 Revolver is one of the most compact, lightweight revolvers on the market.

When it comes to self-defense, some people prefer pistols, while some prefer revolvers. .380 ACP is not a revolver caliber you see every day, but it offers many advantages, including low recoil, high reliability, and accuracy fit for self-defense purposes. Can the 380 really hold so much power in such a small size? Let’s find out!

While the 380 isn’t the most accurate revolver out there, it’s perfectly adequate for self-defense and yields surprisingly tight groups despite its incredibly short barrel length. From a defensive range of 10 yards, my average 5-shot group was just under 3.5”. It’s decently accurate up to 15 yards, and I was even able to keep most shots within a target from 25 yards! It’s not an ideal level of accuracy for target shooting, but for self-defense? It’s more than acceptable.

The 380 is a generally reliable revolver. I had no problems using the half moon clips, or “Stellar clips”, as Taurus calls them, even with cheap ammo. I’d recommend always firing with the included clips, as I did have some issues with rounds sticking without them. Overall, however, it’s a very reliable revolver.

The frame is made from aluminum-alloy, while the barrel and cylinder are made from steel. It’s built to last and manufactured with high-quality craftsmanship. It’s available in a wide range of colors and finishes, including both gloss and matte blue, matte gold, and traditional light and dark gray. Since aluminum-alloy is a softer material, it is prone to a bit of scuffing. While this only affects the aesthetics of the gun, it’s still something to keep in mind.

The grip on the 380 is excellent. It’s made of soft rubber, and very easy to hold. Since the 380 itself is so small, the grip is also on the smaller side. However, it’s still very comfortable and grippable. Even though this revolver is double-action-only, it’s still very controllable and points naturally.

It comes standard with two low-profile, snag-free sights. The front is fixed, while the rear is adjustable for windage. The rear sight is built within a groove on the upper surface of the frame and lines up with the front sight to give you a better aim. It also features a bobbed hammer that rests flush with the frame, meaning there are no hammer spurs that can catch on your clothing.

The trigger is okay. It’s pretty heavy, but not too bad for a double-action revolver. Weighing in around 14 lbs, it’s heavier than most double-actions, even the Colt King Cobra. Even though it’s heavy, the pull is still smooth. Faster pulls offer better consistency than slow pulls, but for self-defense, you probably wouldn’t want to do a slow pull anyway!

The 380 has a couple of different innovative safety mechanisms built-in. In addition to the transfer bar safety, it also features the Taurus Security System, or TSS. The TSS features a lock and mini key that makes the gun inoperable when locked and not in use. This, along with a special plate that only pulls the hammer when the trigger is fully depressed, increases safety by lessening the chances of an accidental discharge.

The 380 has a 5-round capacity and includes five Stellar clips. These half moon clips hold your ammo to make extraction simpler and act as mini “speed loaders,” spacing the rounds the correct distance away from the firing pin to ensure proper ignition. They take a little getting used to, and can be a bit difficult to load and unload. Once you get the hang of it, though, the whole process becomes much simpler.

You can shoot the 380 without using the Stellar clips, as long as your cylinder is chambered properly. However, it is harder to eject rounds this way. If you want to use the clips but find them difficult, aftermarket moon clip loaders and unloaders make it easier.

As part of Taurus’s Ultra-Lite line, the 380 features a lightweight alloy frame. The company has engineered the 380 specifically to keep both size and weight down. Some self-defense revolvers can have quite a bulk to them, but not this one!

The shorter length of the cartridge makes it possible for the cylinder, and in turn, the frame, to be much shorter than most. It weighs just under 16 oz and measures 5.95” overall, making it one of the most compact, lightweight, and easily concealable revolvers on the market.

Taurus knows how to keep recoil down. Despite the incredibly low weight and small size, the 380’s recoil is very manageable for shooters of all sizes. It’s a great low-recoil alternative to other revolvers, offering nearly half the recoil of those with similar weights. The grip wraps around the rear frame, further mitigating felt recoil, increasing control, and letting you get faster follow-up shots.

The Taurus 380 MSRPs for the relatively low price of $513, and some retailers even offer a lifetime warranty on it. If you’re looking for a budget option, you can find a used 380 for around $350.

The 380 is excellent for concealed carry and self-defense. To recap, here are some of its best features:

These features and more make the Taurus 380 revolver an excellent self-defense option for shooters of all ages.