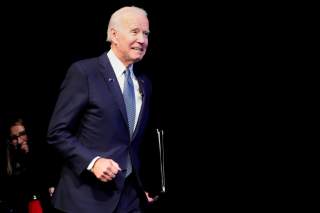 The fifth Democratic debate begins at 9 p.m. ET in Atlanta, Georgia, and is co-hosted by MSNBC and The Washington Post. Biden’s campaign team appeared to jump the gun, sending out a post-debate-related email at 3:09 p.m., The Hill reporter Niv Elis tweeted.

“Did I make you proud?” the email asked, adding that Biden is “leaving the fifth Democratic debate now.”

“I hope I made you proud out there and I hope I made it clear to the world why our campaign is so important,” the preemptive email reads.

After the mistake, Biden’s campaign sent out a second email apologizing.

“You might have just gotten an email from Joe about just getting off of the debate stage. That’s our bad,” the email stated (emphasis theirs).

“We know Joe is going to make us proud tonight. We were just so excited for it that we accidentally hit send too soon,” the email continued.

It goes on to ask for donations to Biden’s campaign, highlighting that the campaign still has “$90,000 we’ve gotta raise before the debate.” It asks for subscribers to “chip in” and donate to his campaign, ending the email with “Thanks, and sorry again!”

Biden’s email marks another error in a campaign that has been riddled with gaffes. The former vice president has hit back at media outlets for reporting on them, suggesting in September that when they do, it “allows you guys to avoid doing your job.”

The Biden campaign did not immediately respond to a request for comment from the Daily Caller News Foundation.