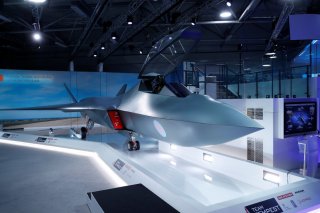 The Tempest sixth-generation fighter jet—currently being developed by the United Kingdom, Swedish, and Italian air forces—is a proposed concept that aims to leapfrog the next-generation capabilities of the world’s most advanced fighter jets today, such as the highly respected Lockheed Martin F-35 Lightning II and F-22 Raptor, Chengdu J-20 Mighty Dragon, and the Sukhoi Su-57 (NATO reporting name Felon).

The United Kingdom’s defense secretary Gavin Williamson has noted that “we [the UK] have been a world leader in the combat air sector for a century, with an enviable array of skills and technology, and this strategy makes clear that we are determined to make sure it stays that way. It shows our allies that we are open to working together to protect the skies in an increasingly threatening future—and this concept model is just a glimpse into what the future could look like.”

As for that future, according to defense writer Stew Magnuson at National Defense magazine, this “technology maturation continues with the program embracing digital engineering concepts to shorten its development timeline.”

This includes “concepts such as digital twins, along with additive manufacturing in order to sharply reduce the amount of time it takes to conceive, develop and produce a new generation of jet fighters.”

Air Commodore Jonny Moreton, the director of the future combat air program at the Royal Air Force, contended that being able to fast-track the advancements is one of the ambitious program’s chief objectives.

“One of the goals is to break the forty-year cycle where something is conceived, developed and built and after it’s in the air twenty years, start thinking about what comes next, and then wonder, ‘Where did my industrial expertise go?’” he said, per National Defense.

He added that the Tempest is currently eyeing a ten-to-fifteen-year development cycle and is aiming to take to the skies by 2035.

There are also efforts to “future proof” the Tempest. “The problem with past jet fighter programs was their decades-long development timelines. Setting requirements too early and engraving them in stone resulted in aircraft being outdated by the time they were finally fielded,” Magnuson claims.

Conrad Banks, the chief engineer for future programs at Rolls-Royce, confirmed that the current concept is for the Tempest to feature a hybrid engine that has the potential to generate ten times the electrical power as the Eurofighter Typhoon.

“We are embracing gas turbines and electrical systems as an integrated power system,” he said, adding that the power could be used for sensors, avionics, and directed energy weapons.

An integrated power system is expected to be a boon to the complex interchanges between jet fuel and electrical systems.

“We have an intelligent power manager—being developed through the Tempest program—that decides whether electrical energy is going to go from the gas turbine to charging the batteries, or vice versa,” Banks said.

It is able to learn “the most effective way of moving power from one spool to the other, from the engine spools to the battery from the battery to the engine.”