Terrible or Terror? Does the Hi-Point C-9 Deserve Its Bad Rap? 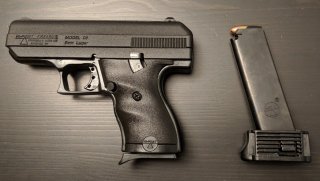 Listen, I already know what you’re thinking. Is this a joke? No, it’s not. I really am taking an unironic look at the Hi-Point C-9 pistol. Its reputation is mostly as a gun that’s a laughing stock of the firearm community. It’s dirt cheap, grotesque, fat, unwieldy, and not smooth in any sense of the word.

Let me say I wouldn’t buy one, but I can see that there is for sure a market for it. If you’re super extremely tight on money, it’s an option, but that comes with a big fat list of disclaimers.

I’m not here to mince words, the C-9 is pretty horrible looking and doesn’t even have a concept of ergonomics. The slide is huge, heavy, and super gritty when being racked. It shares that trait with some of the other features on the pistol. You’ll find that the trigger is equally horrendous, if not worse. It’s heavy too. At eight pounds, it’s not something I like at all, especially since it’s a striker-fired gun. But I needed to keep in mind that the C-9 is not designed to be a good-looking or smooth gun. Its purpose is to be functional. That’s it.

And functional it is. I was surprised that I actually didn’t run into too many malfunctions after a break-in period. It was pretty bumpy at the start with frequent malfunctions and my slide refused to go into battery for a little while. Following those issues, I gave it a good clean and coat of oil. Then I proceeded to rush through 500 rounds as quickly as I could. After that, I really only had one or two issues. It’s been free of malfunctions for a little bit now but I’m still wary of using it as protection. After using this pistol for a while, I began to see the potential strength in the Hi-Point C-9. It’s extremely affordable self-defense, despite my personal issues with it. You can get this for under $200 bucks. That’s all it costs to protect your family and yourself. It sets itself apart further by functioning reliably (for the most part) and at the end of the day, that’s what I think matters most.

Accuracy will leave you wanting though. It’s not the worst out there when it comes to closer ranges. At ten yards, I was getting groups that were just a little over one inch. Where it starts to suffer if anything past that. At twenty-five yards on a stable surface, I was hitting these huge groups of three to four inches. When tested side-by-side with some of my nicer pistols, it’s a lot worse. Still, accuracy like that will still get the job done when it comes to self-defense.

It’s not something I would use for concealed carry though. It’s too big, clunky, and heavy for concealing. I think it would serve better as a nightstand gun or something you could stash in your vehicle. Given its reliability, it’ll be perfectly serviceable for situations where your life might depend on it being able to consistently cycle ammunition.

I don’t like this pistol at all. I don’t recommend you buy it. I say you should save your money for something just a little bit better. But if you’re really down on your luck, the Hi-Point C-9 could save your life. And you know what they say “if your Hi-Point jams, you can always use it as a bludgeon.”