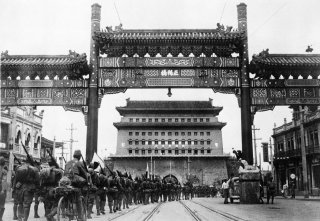 Japan has gone down in popular memory as the original victim of weapons of mass destruction, after the U.S. dropped atomic bombs on Hiroshima and Nagasaki in August 1945.

But it was China that was the real first victim of WMDs in World War II—and the perpetrator was Japan itself. Tokyo’s biological weapons killed hundreds of thousands of Chinese. And their murders still matter today.

It’s true that other nations—including Germany, America and Britain—maintained their own chemical and bio-weapons programs during the war. Mussolini’s Italy even employed mustard gas in Ethiopia in 1935. Yet fear of retaliation deterred the major powers from using chemical or biological weapons against each other.

But Imperial Japan had no such fear because backward China had no WMDs and no other means of massive retaliation. Moreover, Tokyo viewed the Chinese as a racially inferior enemy—one that foolishly resisted a massive Japanese army that tried for nearly a decade to subdue China.

Bio-warfare seemed one way out of China’s unseemly quagmire.

Unit 731, Japan’s biological warfare program, was formed in 1932 under the leadership of the notorious Gen. Shiro Ishii, chief medical officer of the Japanese army. Based in Japanese-occupied Manchuria, Unit 731 operated under the cover name “Epidemic Prevention and Water Purification Department of the Kwantung Army.”

But Unit 731 didn’t prevent epidemics—it spread them. Nazi medical experiments on concentration camp prisoners, performed by monsters such as Josef Mengele, have been thoroughly documented.

Less well known are the experiments that Japan performed on adult male Chinese prisoners of war and political prisoners, as well as women and children. The captives were injected with diseases such as cholera and gonorrhea, or chained to stakes while aircraft dropped plague bombs.

There was also the vivisection. “Human experimentation gave researchers their first chance to actually examine the organs of a living person at will to see the progress of a disease,” according to Hal Gold’s book Unit 731 Testimony.

“Vivisection was a new experience for the doctors of Japan,” Gold writes. “One former unit member explained that ‘the results of the effects of infection cannot be obtained accurately once the person dies because putrefactive bacteria set in. Putrefactive bacteria are stronger than plague germs. So, for obtaining accurate results, it is important whether the subject is alive or not.’”

As atrocities go, or as much as sane human beings can rank them, this doesn’t sound any worse than Nazi experiments. But unlike the Nazis, Imperial Japan actually weaponized its biological horrors.

Cholera was dumped into wells used by the Chinese populace. Fleas were carefully collected, infected with plague and then dropped in aerial bombs over Chinese cities and villages.

“The air team and those who knew how to handle bacteria would get into a plane together and spread germs over a village or other areas of population concentration,” said a Unit 731 member cited in Gold's book. “After that, the area would be examined for the effectiveness of the attack.”

“With plague, fleas were used as a carrier and transported in a ceramic bomb,” the unit member added. “At first, glass bombs were tried, but they did not work well. Rats weigh about 600 grams. They were infected with plague, then they were infested with 3,000 to 6,000 fleas each and loaded into the ceramic bomb. When the bomb is dropped and breaks, the fleas scatter.”

Half a million or more Chinese died in these attacks.

It would be satisfying to say that the perpetrators of Unit 731 were punished for their crimes. But there’s no happy ending here. In 1945, Ishii and the other members of Unit 731 made a deal with Gen. Douglas MacArthur and the U.S. government: they would turn over their research to the Americans—not the Soviets—in return for immunity from prosecution.

Even compared to the sordid dealings that allowed Nazi scientists and spies to trade their expertise for immunity from war crimes trials, this was repugnant.

Some might dismiss Japan’s bio-war against China as history from a past century. But that history still resonates. Memories of Japanese atrocities still linger in Asia. And as China and Japan appear on the brink of conflictover disputed islands in the East China Sea, it’s worth remembering that this time, it’s China and not Japan that has weapons of mass destruction.

Should Chinese ever contemplate the use of nuclear weapons against Japan, you can be sure the ghosts of Unit 731 will be at their side.

This article by Michael Peck originally appeared at War is Boring in 2013.