Terrorism: Making a Comeback or on the Decline? A New Report Has Answers. 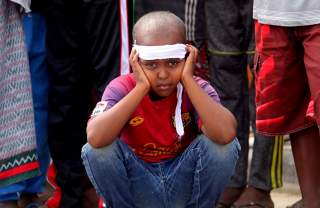 A day doesn’t go by when a story about a deadly terrorist attack somewhere around the world doesn’t make a headline. Holidays are unfortunately not excluded from the grime and gore: this past April, during Easter festivities, Sri Lankans witnessed one of their worst terrorist attacks in the country’s history when a group of suicide bombers radicalized by Islamic State ideology attacked churches and hotels, killing over 250 people.

Studying the underlying political, social, economic, and religious factors that inspire individuals to commit such heinous acts of violence is admittedly a joyless task. Given the various interpretations among the academic community about what it means to actually be a terrorist and what qualifies as terrorism adds complexity to the entire discourse. Measuring terrorism is an inexact science made even more difficult by the ease with which a prospective assailant can conduct an operation using crude weapons with little to no advanced warning.

Fortunately, researchers at the University of Maryland have helped us make sense of modern-day terrorism through the National Consortium for the Study of Terrorism and Responses to Terrorism program. The consortium’s annual report is perhaps the most accurate qualitative resource for academics and practitioners who are responsible for understanding the terrorist phenomena and developing policies to counteract it.

This week, the START project published its report covering 2018, a year when the Islamic State was steadily losing its territorial caliphate in Syria (the group lost most of its territory across the border in Iraq the previous year) and Al-Qaeda-affiliated groups were asserting their presence in Africa. While the product is quite detailed, full of numbers and trends across a wide constellation of countries on multiple continents, several findings stand out immediately.

1. Terrorism in Europe is declining: It was only a few short years ago when Western Europe appeared to be on the front-lines of the battle against the Islamic State. From the 2015 assaults on the Charlie Hebdo paper (planned and sponsored by al Al Qaeda's affiliate in Yemen) and the shootings against cafes and theaters in Paris to the 2016 attack against a Brussels airport and metro station, you could forgive Europeans for waking up in the morning and assuming that another large-scale, spectacular act of terrorism was an inevitability.

Terrorism in Europe, however, has steadily declined from those terrible years. The number of attacks from 2017 to 2018 decreased by 31 percent, with the number of fatalities decreasing by 70 percent. A total of twenty-five Europeans lost their lives to terrorism in 2018—twenty-five people too many, of course, but a substantially lower number compared to 2015 and 2016. Viewed another way: Parisians experienced five times the number of deaths in a single night (the November 2015 bombing and shooting rampage) than the entire European continent experienced in all of 2018. Surely that’s something to cheer about.

2. Afghanistan in the doldrums: The war-torn Central Asia country is at the top of the list, having sustained over 9,800 deaths from terrorist incidents in 2018, a 61 percent hike from the previous year. The number of attacks also increased by 26 percent, a reflection of a violent yet largely static battlefield between the Afghan government on the one hand and a multitude of insurgent and terrorist organizations on the other. Afghan police bore the brunt of most of the attacks, with 36 percent of the strikes targeting underpaid and tired constabularies who are largely serving in combat roles. The beginning of a dialogue between the United States and the Taliban, designed to at least reduce the violence across the country in preparation for more complicated intra-Afghan peace talks, apparently had no effect on the Taliban’s willingness to restrain themselves. Indeed, with discussions on the horizon, the Taliban may have increased the pace of their operations in an attempt to acquire leverage.

3. The worst terrorist attack of 2018: Pakistan has consistently been a leading contender for the country with the world's worst terrorist problem. This should come as no surprise; while Pakistani security forces cleared the tribal areas along the Pakistan-Afghanistan border region in a major operation years earlier, terrorist organizations have a habit of finding new ground—either in other remote areas with a weak government presence or in the major population centers, where prevention is especially difficult. Pakistan actually had a much better year in 2018, with overall terrorist attacks and fatalities both down by about a third. But the country was still home to the single deadliest terrorist attack of that year, when an Islamic State bomber targeted an election rally in Baluchistan, killing 150 people and injuring an additional 180.

Daniel R. DePetris is a columnist at the Washington Examiner and a frequent contributor to the National Interest.