Tesla’s Brilliant Business Strategy Could Be a Total Game Changer 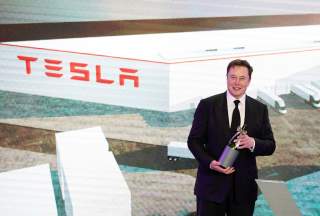 Few companies have attracted as much praise, derision, scepticism and enthusiasm as Telsa Motors and its founder Elon Musk. Having interviewed Elon Musk and the Tesla leadership as part of my research, one of the questions I’m asked most frequently is: how can you make sense of Tesla’s wild strategies? The latest example is the move to create a “Gigafactory” for car batteries just outside Berlin.

Part of the challenge in understanding Tesla’s strategy are the commentators. These range from short-selling to star worship. Many ask the wrong questions, such as why Tesla isn’t making any money – a question appropriate for a mature business, but not a growth one. While all businesses must be sustainable in the long run, Tesla is like most rapid growth companies that eat up more cash flow than they produce while in the early growth phase.

But the biggest part of the challenge may simply be understanding Tesla’s strategy. Why would a new company, already taking on the Herculean task of introducing an entirely new type of car to the market, also take on the incredible risk of building some of the world’s largest battery factories? Or for that matter, a dealership and repair network? Or a charging network? Or, even crazier, a solar power business?

On the surface, it makes no sense and there is no doubt that it introduces more risk to the company, increasing its chances of failure. But when viewed through the lens of the decades of research on technology strategy, Tesla’s approach takes on a different light.

The big challenge to understanding Tesla’s strategy is that most of us only look at it from one level of analysis. Namely, when we see Tesla, we see a company that produces cars. But when I teach executives how to invest in future technology, I encourage them to think at multiple levels of the technology stack: not just products, but also components and systems. So let’s take a closer look at Tesla.

At the level of the product, although a Tesla looks the same as other vehicles, underneath the hood the vehicle has a fundamentally different architecture – both in terms of hardware and software. This matters because a long research tradition underscores that when incumbents face a new technology architecture, they struggle to understand and adapt.

Even though they can see what the technology is, they struggle to adapt both because they are reluctant to give up the existing capabilities they have perfected over decades and to fully integrate the new ones. Although incumbents may imitate the new architecture, they have a hard time overcoming the way they have done things in the past and to match the superior performance of the new, purpose-built architecture.

You can see evidence of this playing out in the auto industry. Early electric vehicles produced by incumbents on internal combustion engine architectures paled in comparison to the Tesla, and even newer “blank slate” efforts sometimes don’t quite measure up. It’s always the little things that get in the way – such as the fact that most vehicles built by other manufacturers have up to five separate software systems rather than a single integrated system like a Tesla, which gives a performance advantage.

If we lower our level of analysis to the level of components, rather than products, we see the Tesla strategy in a different light again. What we know about technical systems is that, as they mature, the value migrates to the bottlenecks that control the system’s performance.

This is why in the PC industry, Intel has made so much money for decades while hard drive and modem manufacturers made peanuts. Intel controlled the bottleneck to the performance of the PC whereas hard drive manufacturers did not.

The bottleneck for electric vehicles now and in the future is the batteries. If Tesla can dramatically lower the prices of batteries by manufacturing at scale, they lower the barriers to adoption for electric vehicles. But more importantly, the battery bottleneck isn’t going away any time soon, which means, if they succeed, Tesla controls the biggest profit pool in the future of auto manufacturing.

Lastly, if we raise our level of analysis above components and products, to the level of systems, we see Tesla in yet another light. The truth is that consumers don’t want products, they want solutions. Most car makers deliver products. But Tesla tries to deliver a complete experience: car, upgrades, charging, insurance – the whole bundle. And as a result, the majority of Tesla owners talk in glowing terms about their Tesla, both because it is a great car, but also a great solution. In what other vehicle do you wake up in the morning to find new self-driving features?

Let’s be clear – the risks are high. Tesla has compounded major bet upon major bet by having a multi-level strategy that targets components, products and systems. Everything has to go well to succeed. But if the stars align, it’s a brilliant strategy at all levels.