Tested by Crisis: The Impact of COVID-19 on the Nuclear Policy Community 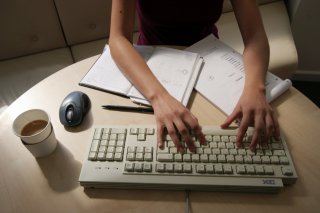 The COVID-19 pandemic has clearly had drastic effects on the workforce and, in particular, on women and people who identify as Black, Indigenous, or People of Color (BIPOC) in the workforce. For the past year and a half, studies have shown that many of these effects are not going to be simple to reverse and will in fact have generational effects on many communities.

On the latest episode of Press the Button, experts discuss a recent study that breaks down the effects of the pandemic on the nuclear community. Jack Brosnan, a program officer at the Nuclear Threat Initiative (NTI), and Mackenzie Cater, the executive assistant to NTI’s Vice President of Materials Risk Management and its chief financial officer, join co-host Michelle Dover to discuss the findings of a research effort they launched for Gender Champions in Nuclear Policy (GCNP). GCNP brings together heads of organizations working in nuclear policy dedicated to bringing gender equality into their spheres of influence. Both Brosnan and Cater provide support to GCNP through their work under NTI’s leadership, including co-founder Amb. Laura Holgate and NTI’s Gender Champions, CEO Ernest J. Moniz, and President Joan Rohlfing.

Brosnan describes the project's impetus, explaining, “Over the past few years, the nuclear policy community has invested pretty heavily in planting new seeds and trying to strengthen its own existing roots, so we set out to explore whether the pandemic has jeopardized the growth in the community.” The short answer: it has.

The report’s findings show stark differences across gender identities in how the pandemic has impacted the lives—both personal and professional—of those working in nuclear policy. One of the core findings Brosnan points to is that “among women who had their work hours reduced due to the pandemic, eighty-six percent of reductions were attributed to an increased burden of care work, and that was true for zero percent of men.”

The burden upon caregivers only increased during the pandemic as childcare or eldercare facilities shut down. They found this burden impacted caregivers across all age groups, including ‘late career’ women executives.

Not only were women in the field finding themselves faced with a choice of staying in their job or finding something with more flexible work hours, but many were also simply pushed out of the field. One respondent noted that in an organization where layoffs occurred “everyone up to this month who left was a woman or person of color.” Survey respondents who identified as BIPOC reported they were “almost twenty percent more likely to have experienced financial hardship due to the pandemic than their non BIPOC peers,” Cater adds.

In addition to looking at childcare and financial hardships related to the workplace during the pandemic, the survey also aimed to gauge COVID-19’s impact on talent retention in the nuclear policy community. This focus allowed Brosnan and Cater to explore means to ensure a “healthy professional pipeline,” says Cater. Their conclusion is that “students have been underserved and, in some cases, are being pushed out of the field.”

For students and early career professionals in the nuclear space, the pandemic appears to have “negatively affected their perceptions of the importance of [nuclear policy] work,” Cater concludes. Thirty-five percent of students and forty-two percent of early-career professionals said they agree with this statement. She notes that this is troubling as even prior to the pandemic, “the nuclear policy community was already experiencing retention issues among early-career and mid-career individuals… and now the pandemic has really exacerbated this crisis of confidence and could potentially further damage this already depleted [field].”

Cater notes that one of the most surprising takeaways “was around the theme of a crisis of confidence.” This crisis, however, is not new, and will likely not disappear overnight. Brosnan highlights that these challenges are systemic. He says for some time women and BIPOC employees have “not [been] receiving the profile, the attention, and the respect that they so well deserved.”

But across the board, there is certainly much work to do. Like any other pervasive challenge, Brosnan points out, “the first step is to recognize the symptoms of the problem.” The next step is doing something about it. For GCNP’s part, Brosnan says the group will engage leaders “to dig in on these issues, to work for their employees, to improve outcomes, and to address these findings to make a more inclusive diverse and equitable workplace and professional community that is welcoming to women, people of color other marginalized groups and presents equity of opportunity.”

The entire interview with Jack Brosnan and Mackenzie Cater is available here on Press the Button. You can read the whole Gender Champions report here and learn more about their initiatives on their website.