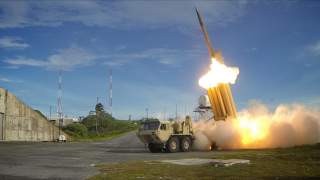 The U.S. Army has deployed to Romania one of its seven Terminal High-Altitude Area-Defense missile-interceptor batteries. The deployment coincides with a shut-down of the U.S. Aegis Ashore missile-defense site, also in Romania, for a scheduled upgrade.

The THAAD battery on May 17, 2019 began setting up its equipment within sight of the Aegis Ashore missile-defense site. The U.S. Army and the U.S. Defense Department separately posted, then quickly deleted, at least one photo of the battery preparing for duty. Some websites have preserved the photo.

The THAAD deployment is controversial. The system, in theory, possesses some of the same capabilities that Aegis Ashore does and could help to fill the gap left by the Aegis system’s temporary suspension.

The Pentagon and NATO repeatedly have tried to explain their reasoning for deploying THAAD. “At the request of NATO, the secretary of defense will deploy a U.S. Army Terminal High Altitude Area Defense system to Romania this summer in support of NATO ballistic-missile defense,” U.S. European Command in early April 2019 announced.

As of early 2019, the Army had acquired around 200 THAAD rockets for its seven batteries and roughly 40 launchers. The U.S. Missile Defense Agency on its website describes THAAD as a “land-based element capable of shooting down a ballistic missile both inside and just outside the atmosphere.”

But U.S. missile defenses for decades have been controversial in Russia. Moscow views American BMD systems as a threat to the global balance of power, as they, in theory, could render ineffective Russia’s own nuclear-tipped rockets. In fact, most U.S. missile-defenses lack the speed, range and accuracy to intercept an intercontinental ballistic missile.

Many Russians also believe, wrongly, that Aegis Ashore has a ground-to-ground capability and could function as a surprise first-strike weapon. Aegis Ashore "play[s] to a very specific Russian fear," said Jeffrey Lewis, a nuclear expert at the Middlebury Institute of International Studies at Monterey.

NATO stressed that neither Aegis Ashore nor THAAD poses a danger to Russia. “The THAAD unit will be under NATO operational control and the full political control of the North Atlantic Council,” the alliance stated  “It will only remain operational until the Aegis Ashore Romania site is back online. The update and deployment are expected to last several weeks.

“In accordance with NATO's ballistic-missile defense system, the THAAD unit will be focused on potential threats from outside the Euro-Atlantic area. Aegis Ashore Romania is purely a defensive system.”