Thanks, Coronavirus: Disney+ Posted a 212% Increase in U.S. Sign-Ups 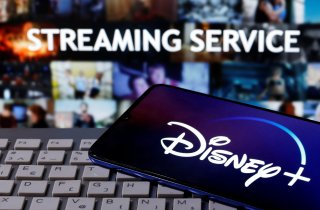 With so many Americans at home, it's been a clear boon to streaming services, which offer thousands of hours of content for homebound people to enjoy, sometimes while they work.

Now, a new report says that most of the major streaming services have seen big subscriber gains from the quarantines - although it appears that some have benefited more than others.

According to data from the analytics firm Antenna, which was first reported by Forbes, the services benefited in a major way. In the Saturday/Sunday/Monday period this week, Disney+ posted a 212% increase in U.S. sign-up volume over the previous week. New subscriptions for the HBO Now streaming service nearly doubled over the previous week, while Netflix jumped 47 percent. CBS All Access and Apple TV+ saw increases of 16 and 10 percent, respectively.

Disney+, with its huge amount of children's and family programming, has clearly benefited in a big way from kids being at home. But overall, signups across the main streaming services jumped 64 percent.

The numbers released by Antenna are not raw numbers, nor are they official figures from the companies. However, per a Variety report which cited HBO parent company Warner Media, the HBO Now service saw a 40 percent surge in time on site since March 14, over the previous four-week period. HBO also revealed increased viewership for some of its legacy series- The Wire has tripled in viewership in the last week, while The Sopranos and Sex and the City have both doubled.

HBO's numbers are measuring engagement, not new subscriptions, but it's clear that both are on the rise. In addition, per Warner, daily binge viewing has also increased over the previous period. HBO, in addition to the shutdown, has been buoyed by the new season of the popular series Westworld.

In a blog post, Antenna CEO Rameez Tase stated that the true test will be what happens with those new subscriptions once the quarantines are lifted and children return to school.

Antenna says on its website that it gets its data from licensing "GDPR-compliant data sources to knit together an accurate picture of the subscription world via sophisticated data engineering and science."

Those CBS All Access numbers came prior to the announcement Tuesday that the service was offering a free month, ahead of the upcoming season finale of Star Trek: Picard.